The USA Tomahawks have kicked off their defence of the 2010 Atlantic Cup in impressive style, with a thrilling 36 – 26 victory over Jamaica at Hodges Stadium in Jacksonville this morning. Playing in front of a vocal crowd, it was two Jacksonville players which gave the Tomahawks the first points of the match, with five-eighth Brent Shorten putting fullback Kenny Britt through a gap to score under the posts in just the second minute of the game.
RLIF Nations Player of the Year for USA and Aston Bulls back, Nate Smith converted the try to give the side an early 6 – 0 lead. Stunned by the early try, the Jamaicans hit back out wide with Huddersfield based centre, Greg Johnson crossing for his first of two tries to level the scores for the visitors.
The match turned into a tight affair for the remainder of the first half, until the home team broke away with two quick tries through Conway Maraki and a second to Kenny Britt. Jamaica pegged one back just before half time through hooker Jamain Wray to see the visitors go into the sheds down 12 – 16.
The second half started similar to the first half, with the American’s again catching the Jamaican’s off guard in the first five minutes of the half to race out to a commanding 22 – 12 lead, before the visitors hit back with three quick tries to run out to a 26 – 22 lead by the 60 minute mark of the match.
The Tomahawks stabilised, and hit back with one of their own to level the scores 26-all before Atlantic Cup’s official medical officer and US team doctor Jack Kazanjian stopped play whilst attempting to take Jamaican hooker, Jamain Wray, off the field so he could be examined for concussion. 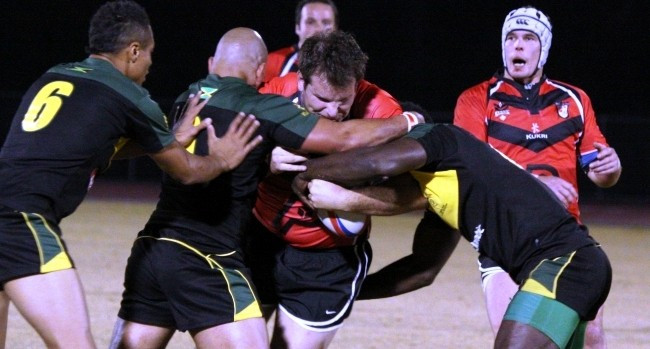