BALKANS CHAMPIONSHIP - GAME 2Greece defeated a gallant Bosnia Herzegovina 58-4 in the Balkan Cup encounter played at Makis Stadium in Belgrade, setting up a clash against Serbia in the final. In a scrappy start to the game, Greece opened the scoring in the ninth minute when George Tsikrikas and skipper Jordan Meads combined to send winger Jordan Kidis over in the corner.Bosnia Herzegovina went close to levelling up when centre Milos Kulasevic raced through but desperate defence from Meads right on the try line saw the Bosnians fail to score. Greece went up 8-0 in the 14th minute when Terry Constantinou ran the ball on the last tackle and then sent a pass onto winger Alvaro Zota, who managed to score in the corner.Both sides then failed to find any continuity with dropped ball diluting the standard of play. It was left to Canterbury Bulldogs Under 20s player Tsikrikas to take it upon himself to produced a barnstorming individual effort to score in the 26th minute. Liam Sue-Tin Kentrotis managed to kick his first goal of the game to push the score to 14-0. Meads collected a bomb from Bosnia Herzegovina just five metres out from his own try line before showing exceptional pace to race 95 metres to score. Meads then produced a wonderful pass for five-eighth Nikolaos Bosmos to race over to score. Kentrotis added the simple conversion to give the Greeks a 26-0 advantage at half-time.It took just two minutes of the second half for Greece to add to their tally when Tsikrikas crossed. Meads was a touch unlucky to have a try disallowed in the 52nd minute when the final pass was ruled to have gone forward. Interchange player Jake Vrahnos then crashed over to score three minutes later before Meads put in a cross field kick that Kidis was able to kick ahead and somehow managed to get his hands on the ball for a try despite the attention of two defenders who failed to get to the ball. Meads added the touchline conversion to put Greece ahead 44-0.Meads then pushed aside the opposition with a fend before racing 55 metres to score in the 62nd minute and it was 52-0 when Vrahnos scored in the 74th minute. Two minutes later, Vrahnos broke through the tiring opposition before heading for the try line. Just metres away from scoring, he unselfishly passed the ball for Ioannis Nake to score. A dropped ball from Greece gave Bosnia Herzegovina a final chance to post points and that is exactly what they did when winger Nedeliko Suvajcevic scored in the corner much to the delight of his team mates. "It took a while for our players to gel but I was proud of the performance that we displayed," said Greek national coach Steve Georgallis. "Full credit to Bosnia Herzegovina, who played well and were unlucky not to have scored more tries. They did well out there and will get better with more games under their belt." 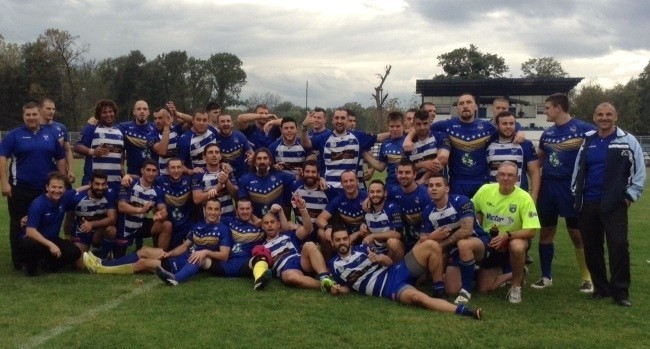