New Zealand have kick-started their World Cup campaign in winning style with a thumping 50-4 victory over a gutsy Canadian outfit. Fullback Apii Nicholls-Pualau starred for the Ferns as she continued to cause havoc with the ball in-hand, while halfback Kimiora Nati was a shining light with a clinical performance.

The Kiwis got off to the perfect start with winger Honey Hireme crossing for the first try of the tournament courtesy of some nice lead-up play from Nicholls-Pualau. Their lead was short lived, however, as they were unable to withstand a mountain of pressure from Canada with back-rower Megan Pakulis barging her way over from dummy-half.

The Ferns regained the lead just moments later with speedster Atawhai Tupaea streaking down the right-hand touchline for their second try of the contest. Kimiora Nati converted to take a handy 10-4 advantage after 15 minutes.

The Kiwis continued to force an array of handling errors with some brutally absorbing tackles but were unable to extend their lead with some costly mistakes of their own.

Despite the valiant efforts of Canada to level the scores, Ferns centre Shontelle Woodman eventually found a breakthrough after palming off a host of defenders before passing inside to Hireme for her second try of the contest. Nati polished off a dominant first-half performance with her second conversion as the Ferns went into half-time with 16-4 lead.

New Zealand earned an attacking raid off the first-set thanks to some barnstorming runs from their forwards, and Hireme looked to have completed her hat-trick only to knock the ball on as she dived in the left-hand corner. Teuila Fotu-Moala continued her dominance as she brushed off a host of defenders to burst through the middle-third, and their momentum couldn’t be stopped as Lilieta Maumau added her name to the scoresheet.

Brimming with confidence, the Ferns soon found themselves on the attack again with Krystal Murray providing significant impact off the bench with a try of her own.

Nati continued her strong day with the boot as she converted to take a comfortable 28-4 lead after 55 minutes. Fotu-Moala was rewarded for her determined efforts with a four-pointer before Nicholls-Pualau scored their fourth try within a relentless 11 minute period.

Fotu-Moala and Mama both grabbed their second tries in the closing stages to round off a dominant 50-4 victory. 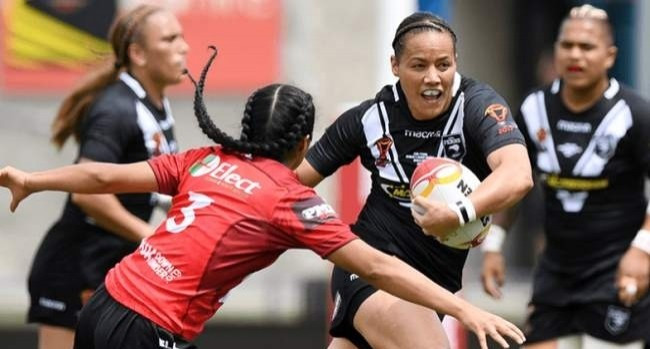