France made their final preparations for their Rugby League World Cup campaign with a hard-fought win over a competitive Jamaican side.

In muggy conditions in Perpignan, tempers occasionally flared in a game with big hits and a number of handling errors on both sides, with France losing both Maxime Herold and Guillaume Bonnet to injuries during the match.

France scored early on after Damien Cardace caught a spiralling high kick from William Barthau and was strong enough to put the ball down in the corner. Maxine Herold then left the game early when he was hit with a huge, but illegal, shot by Jonny Magrin that left him lying flat on the ground.

Jamaica made good metres in possession, but silly penalties were costing the Jamaicans and the French were able to extend their lead after a smart passing move saw the ball go quickly through the hands of Barthau, Baitieri and Kheirallah, with the final pass sending Ben Garcia clear to score.

After Jake Ogden was sinbinned for interference at the play the ball, Bastien Ader was able to cross the whitewash twice in five minutes to extend the French lead further and it seemed that a rout was on the cards.

Jamaica were down, but not out and nearly found a way back into the game between the two Ader tries when Danny Thomas touched down after a clever grubber from Jy-Mel Coleman, but he was adjudged off-side and the try was disallowed. They were able to get on the scoresheet after a Penalty by Jermaine Coleman following French indiscipline at the ruck to leave the score France 22 Jamaica 2 at Half-time.

Jamaica then scored a try out of nothing at the start of the Second Half when, after hacking the ball forward from a fifth tackle high kick that hit the ground, Omari Caro hooked the ball back from over the touchline into the hands of Ashton Golding, who then outpaced Hakin Miloudi to score in the corner.

Both sides traded completed sets and each came very close to another score, with Djalout deemed to have knocked on over the line for France and Ogden only just being stopped on the line by a tremendous try-saving tackle by Fages when he seemed destined to score.

Both sides were making hard yards, but also committing handling errors when in opposition territory. Jamaica were also starting to concede more penalties at the play the ball and this gave France the chance to further extend their lead when, after another interference penalty took France to within 5 metres of the Jamaican line, Mickael Rouch was the beneficiary of an excellent miss-pass from Jullien that took two defenders out of the game and put Rouch over for the try.

Fages was then denied a try when it was ruled that Bonnet knocked the ball on in the process of kicking the ball into the goal area when on the ground. Bonnet appeared to tweak his knee in the tackle that preceded this and he was helped off.

With Jamaica getting more frustrated in defence and conceding yet more penalties, France were able to score a sixth try, with Jullien rewarded for his enterprising play all through the game as he was put through a gap by Barthau to score.

Jamaica, much as they did in the first half, rallied at the end of the game and began to cause France to concede penalties and commit handling errors. It was a final and slightly clumsy handling error by Ader from a French Scrum that saw Ogden make up for his earlier sin-binning with a quick pick up and dance over the line for a well-received try that, after Coleman slotted the extras, left the final score France 34 Jamaica 12.

France will kick off their Group A campaign in Canberra on Sunday 29th October against Lebanon. 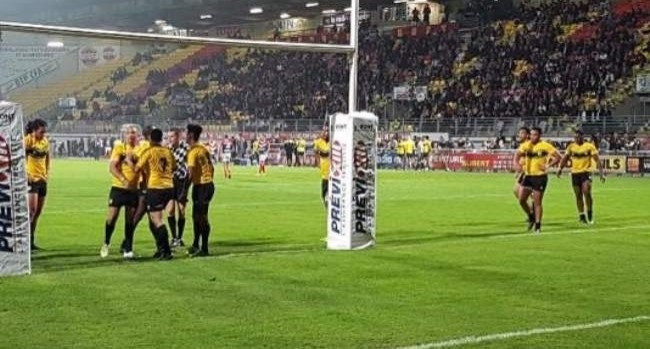