In a closely-fought match played at a high pace in Osnabrück, Germany, the Netherlands beat Germany for the first time in their history.

After taking the lead after 3 minutes following some nifty footwork by Vivian Seelweger to put Kyrill Goncharev over, the Germans were looking comfortable. But a series of errors, including back-to-back penalties, gave the Dutch the position they needed to unleash their speedster Santino Landus on the wing to touch down only minutes later.

Germany took the lead again with Philip Hunz battling his way over the line after some fine handling stretched the Dutch defence. A loose carry again led to the Dutch retaining possession in the German 20 resulting in a try under the posts for Daniel de Ruiter from the scrum. Following the successful conversion, the Dutch were now ahead for the first time in the match. After some end-to-end play, and following a dive for the line from dummy-half Benji van Bodegraven – who was a constant threat – the Germans claimed he knocked on when he was held short of the line. The referee deemed play on and from the resultant play-the-ball a long pass by Dutch captain Ben Dommershuijsen saw Landus go in for his second.

From the kick-off the Germans fought their way back up the field, only to give away possession 10 metres from the Dutch line by knocking on when retrieving the ball from their scrum. This proved costly, as from the resultant scrum Arie Razoux Schultz broke through some very weak tackling to run the length of the pitch and score under the sticks. From the re-start Germany kept Holland pinned in front of their own line, forcing a goal-line-drop-out. The Germans drove the ball in and a scoot and perfectly-time pass from hooker Liam Doughton put Goncharev through a gap for his second of the match and keep the home side in touch at the break, trailing by 18-24.

The second half was a dour contest with some relentless pressure by the Dutch countered by tremendous goal-line defence. The Germans fought their way back up the field, aided by unnecessary penalties by the Dutch, and Mawuli Améfia scooted from 10 metres out to bludgeon his way over the line. No sooner had the Germans got back within 6 points than a loose carry gave away possession from the re-start. Some quick passing saw the German defence bunched in the middle and de Ruiter went over out wide for his second. Both teams had further opportunities to score but bad-decision-making and sterling defence from both sides meant the score remained 18-30.

Germany co-coach Simon Cooper said after the match, “It was very frustrating to make so many errors and give away possession. When we did keep the ball, we made some terrible decisions and did not capitalise on field position.”

Kane Krlic, Holland coach, said: “It is great to get our first win in 11 years this Saturday. A much needed win for the boys, after three years of taking the step to develop from the "bottom up". For me, the most pleasing aspect of yesterday was seeing so many young Dutch players proud to represent their country playing rugby league. With a large chunk of the squad under 23, they'll only get better with time. Big raps to Germany too, as always, great hosts and made sure we were looked after. The game was played in great spirits and similar to ourselves, they are using games between the two nations as a way of developing domestic based players. The two countries have a great relationship and understand the importance of working together in order for both countries to get stronger and develop.” 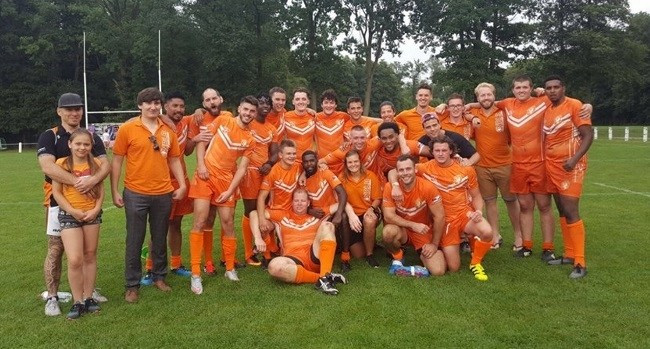