Jamaica defeated Canada 28-14 in the second match in the 2017 Americas Championships in the Reggae Warriors’ first home Test, held at the Mona Bowl, University of West Indies, Kingston.

A severe thunderstorm before kick off saw the game delayed by 15 minutes, but not even the heavy showers could dampen the spirit of both teams and the passionate supporters eager to witness history. Jamaica opened the scoring in the third minute through fullback Joseph Shae, Canada responding shortly after when centre Rick Schouten crashed over in the right corner, Denny McCarthy converting for a 6-4 Wolverines lead.

Doncaster’s Aaron Jones-Bishop then released flyer Kenneth Walker twice then on the left for tries for the hosts and stand off Fabion Turner scored a superb solo effort from 30 metres, Jones-Bishop converting to give the Reggae Warriors an 18-6 lead at the break.

Canada cut the deficit shortly after the re-start when veteran winger Tony Felix crashed over on the right edge to make it 18-10 . Jamaica's Kareen Harris scored next but Canada again responded, this time through hooker Jack Couzens to make it 22-14 and set up a tense finish.

Both teams stood firm in defence but Jamaica debutant Steve Miller sent the crowd into rapture when he recovered a chip kick from Shae on half way and raced untouched to the try line, Jones-Bishop converting to seal a tremendous win.

“The energy from the fans was phenomenal, they pushed the players to their capacity,” commented Jamaica head coach Romeo Monteith. “Hats off to Canada who stuck to the task and never gave up. As for the Jamaica lads, they were focused and confident, their execution was pretty good throughout playing to our advantage, our pace out wide. The forwards were solid in the middle and that gave us our platform.” 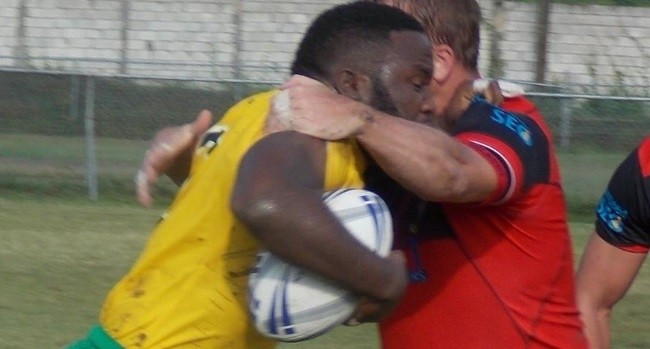