German skipper Leo Burngruber, in his final international appearance, led his side to a convincing 11-try victory over the Czech Republic in Karlsruhe to take runners up spot behind Italy in the Euro Shield.

The hosts were at full strength, picking from a squad of 36 at their final training session, while the visitors were without their captain Jan Sluka and the inspirational Michal Priputen but gave debuts to three of their up and coming stars from the Beroun Panthers youth side.

The Germans had the match won by the break, building an impressive 40-6 lead with scrum half Berngruber leading the way with a brace of touchdowns and the Keinhorst brothers in fine form, with Nick also posting a double and hooker Jimmy dominant in midfield, adding a touchdown and six goals. Simon Cooper and Michael Mark also crossed for the hosts, Andrew Muhall replying and Michael Kucera converting for the over-run Czechs.

The visitors never recovered from their slow start, only substitute Martin Majovsky making a real impact with his high work rate in defence and leading their better showing in the second period.

Kucera added a try and a further goal in the second period and back rower Stepan Louda found the line twice but Jimmy Keinhorst finished with 26 points from a two try, nine goal haul, centre Patrick Rhustorfer, Mark again and Nico Koch completing the scoring for the Germans.

The match was taken to Karlsruhe as a promotion for the sport and was rewarded with a healthy crowd in attendance. 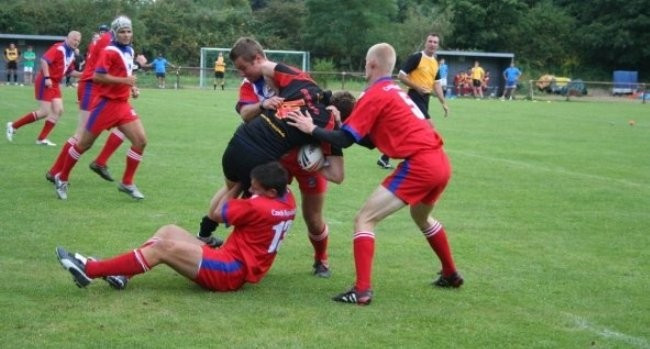