Italy continued their preparations for the 2017 Rugby League World Cup in Australia, New Zealand and Papua New Guinea with an crushing win against an inexperienced Spanish side.

In a game played in 30 degrees heat in Piedmontese, the more experience Italian side stormed over the line straight away as Lucas Bruzzone found a gap to score with barely a minute on the clock.

Despite Jonathan Infante replying with a try straight away, this proved to be their highlight of the game as Davide Spinnato scored twice in quick succession to put Italy in full control.

This set the tone for the game as the Italian team, bolstered with stars of their successful World Cup Qualifying campaign, exploited gaps and space in the Spanish defence to run in tries on a regular basis in the first half, with Gioele Celerino running in two quick fire tries. Mirco Bergamasco kept up his excellent kicking performance for Italy, landing six conversions to give Italy a 40 point lead at half-time.

More of the same occurred in the Second Half as Jaume Giorgis run clear to score under the posts after just two minutes of the half.

Spain battled hard, but were constantly met with big defence and unrelenting attack by the more experience Italian team. This was reinforced by a quick-fire Hat-trick of tries from Francesco Di Trapani, who ran in three tried in seven minutes to take the game away from Spain and help lead Italy to a 94-4 win.

Spain coach Darren Fisher said “It was a very difficult day for us with the inexperience of our team.  For us the game was to reward domestic players with an international cap and so we fielded 10 debutants including four under-21 players.  Obviously, we were simply no match for the experience of the Italian side.

“In terms of the game, ball retention was a key for us – we did far too much defending in 30 degree heat.  We constantly found ourselves defending back-to-back sets and any team would fold under that pressure.  I’d personally like to thank Tiziano (Franchini, FIRL vice president) and FIRL for their hospitality and services provided; it was the best we have received from any team away from home.  We wish them the best for the world cup and look forward to seeing some of the guys we played against make that squad.”

Italy coach Kelly Rolleston said “It was good to get a convincing win in our last match before the start of our domestic competition.  I was pleased in the way the players stuck to our game plan and continued to play as a team.  It was important for everyone that we put in a strong performance in Saluzzo and as a team and I think all the players involved played well and contributed to the win.  I would also like to give credit to Spain who gave their all up to the final whistle.

“We gave some new players space at the international level and all of them stepped up and honoured the Italian jersey.  The domestic competition will be an important opportunity for them to confirm the good form they showed in the match.  Also a special mention to Matthew Sands who has been a cornerstone for FIRL in the last 10 years, who played his last match for Italy today and I know the boys were happy to send him off with a good win.“ 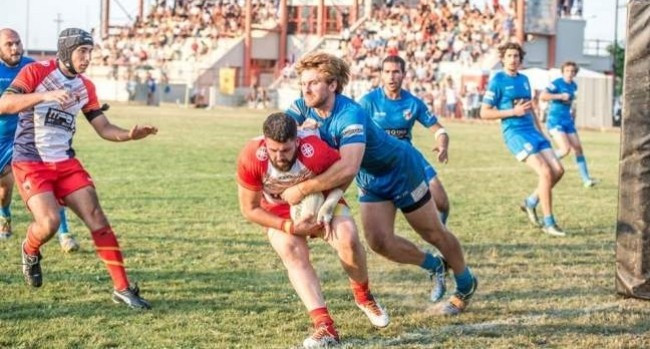