The Bati secured back-to-back wins for the first time in World Cup history and with such a high points differential are now virtually assured of a place in the quarter-finals ahead of Italy, even if the Azzurri beat them on Friday night.

The Townsville crowd had already watched a whitewash in the earlier match but Fiji took it to the next level, surpassing their 11-try haul from their week-one win to notch 14 tries and belt Wales in a pure masterclass. Suiliasi Vunivalu scored a hat-trick and Taane Milne and Viliame Kikau each bagged a brace as the Bati showed they will be a forced to be reckoned with in the weeks to come as they attempt to better their semi-final finishes at the 2008 and 2013 World Cups.

While their string of established NRL stars certainly dazzled, outstanding performances from Fiji’s lesser-known players will have strengthened coach Mick Potter’s confidence of making it to the final.

Backrowers’ Viliame Kikau and Salesi Faingaa showed they will be names to known in the future after putting in impressive shifts on the edges.

Despite levelling the scores at 6-6 through lock-forward Morgan Knowles and appearing in match after ten minutes, Wales simply couldn’t match the strength, skill and speed of the star-studded Fiji line-up.

The Bati enjoyed 70 percent of the possession in the first half and went to the break leading 42-6 after a compelling first 40 minutes.

A runaway-try to Hayne early in the second half preceded a stunning put-down from Vunivalu which brought up the half century for the Bati with thirty minutes still to play. Fiji continued to put their foot on the gas, adding another four tries before the end of the game.

A heated tussle in the final five minutes of the match could have been costly for Fiji in games to come had it boiled over the way it appeared to be heading.

By game’s end, Fiji proved they are a side now at another level compared to Wales and ready to take on the competition and world’s best. 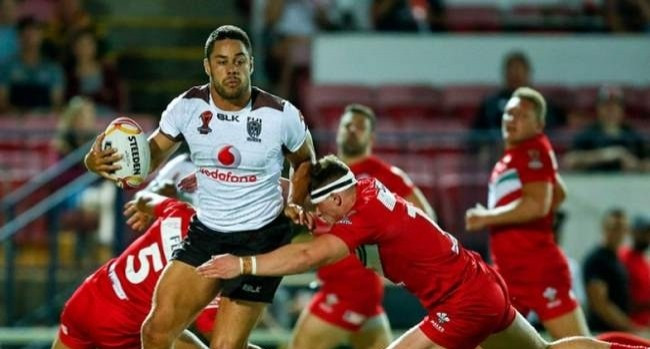