After leaving the field at half time with three tries next to his name, Graham wasn’t finished yet crossing for another four-pointer midway through the second half as Australia asserted their dominance in their pool group.

Australian fullback Billy Slater also etched his name in the record books as his 13th World Cup try in the second half put him level with Bob Fulton and Jarryd Hayne for the most tries in the history of the tournament.

Coming in as heavy favourites Australia wasted no time going on the attack and testing the French defence. Debutant, Tom Trbojevic, almost had a dream start to his international career after he found his way to the try line in the seventh minute before being denied by the video referee.

But Australian fans wouldn’t have to wait much longer for their opening points before Graham opened his try scoring account in the 12th minute. Following repeated raids on the French line, Graham forced his way past three French defenders before muscling his way over and slamming the ball down for Australia’s opening points. Then just three minutes later, Graham once again found himself on the good side of the French try line, crossing over off the back of a classic Cameron Smith and Billy Slater play.

The try saw Australia jump out to 10-0 advantage after just 15 minutes of play as things started to look ominous for the Frenchman.

But France hit back and showed they aren’t easy beats, turning up the attacking heat and trying to find ways around Australia’s defence. But the eventual break would come through the middle after France fullback, Mark Kheirallah, picked up a Smith grubber on the fly and pinned the ears back as the talented fullback streaked up the middle of the field for a great 90-meter effort.

With the scores sitting at 10-6 with half time quickly approaching, Australia started to regain control of the match thanks to none other than Graham. In the 31st minute, Graham set GIO stadium into a frenzy when the Cronulla backrower got on the outside of the French defenders and put the ball down almost on the same blade of grass as his previous two tries, as he brought up his first half hat-trick.

Australia managed to sneak in another try before half time through Josh Dugan who turned the French backline inside out for his eighth try in the green and gold jersey.

As the siren sounded to get the second half underway, France was dealt an early blow when centre Olivier Arnaud left the field injured. It didn’t take long for Australia to capitalise on the struggling French outfit finding the try line just three minutes into the second half through debutant, Cameron Munster, opening the flood gates for the rest of the half.

Australia ran in six tries in the second half including a fourth by Graham, and a try to Slater in the 52nd minute, which tied the Melbourne Storm fullback for most World Cup tries.

Australia capped off the win with Valentine Holmes crossing on the stroke of full time as they secured their second win of the World Cup, going home winners 52-6. 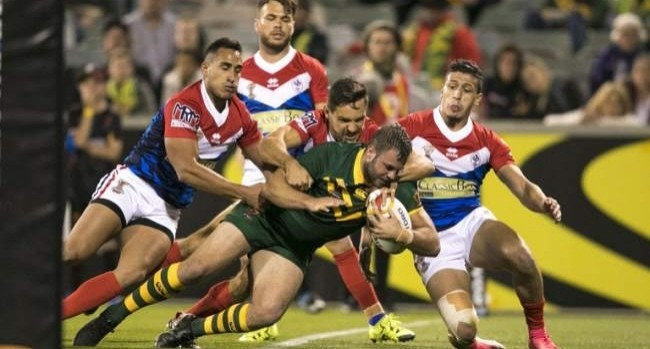