Following a convincing win against their Irish counterparts, Scotland U19s headed to Maryport with plenty of confidence, but knowing that they would face stern competition in the form of Cumbria. With six first-choice players missing from the squad, including their captain, Toby Williams, Head Coach Mark Senter was forced to to make adjustments. This did however, provide an opportunity for other players to be brought in to demonstrate what they could do, increasing the competition for places in future.

From the outset it was clear that the teams were evenly matched.  The Cumbrians were well drilled, but this was matched by the energy, commitment and team spirit displayed in the Scottish ranks.  Matt Hogg took on the captaincy and led his team well, successfully directing them through considerable pressure for significant periods.

The most impressive of those being a heroic stint towards the end of the game, during which the Scots repelled four consecutive sets close to their line showing tremendous tenacity.  This ended with a blocked field goal attempt that would have won the Cumbrians the match. The final score of 22:22 was a fair reflection of a match that could have gone either way. There were strong performances from Luke Westman (who had flown in from Australia to play), Archie Anrade, Luke Walters at 9 and George Kinnaird at 13.  Clayton Woods tackled his heart out, and Max Hutcheon at 12 won the man of the match award.

Head Coach Mark Senter said: “I was disappointed not to have pulled off the win, but I was very proud of the performance, particularly the teamwork, effort and tenacity, especially in defence and when under sustained pressure. The Scotland U19s showed some real potential and with further experience will continue to develop well as a team, and the vast majority of the squad are still eligible to play next year.  I'm very encouraged by what I have seen.” 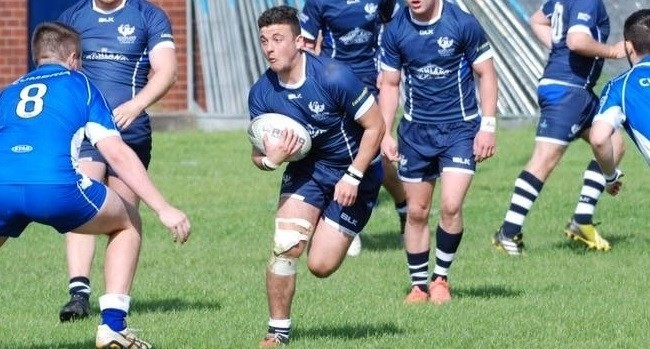