The Czech Rugby League Association fielded its development squad against the Canada Military Wolverines as head coach Ladislav Cintler assessed new players ahead of the Test matches against Norway and Ukraine later this year.

Cintler has plenty of good problems following a dominant display from the locals against a side drawn from Canada’s NATO force based in Poland. Incumbent Czech Republic scrum-half Patrick Koliska had a field day, scoring a hat-trick of tries and converting nine times for a personal 30-point haul. His side racked up a 24-0 halftime lead and really put their mark on the game from 54 minutes onwards, scoring seven tries in that period.

"We had just one training session together,” said captain and stand-off, Jarda Bzoch (pictured). “We made a lot of mistakes in the first half that cost us lots of energy in defence but we didn’t let the Canadians score. We started more confidently in second half and tried to calm down our game, focus on the game plan and show our skill.”

His opposite, Warrant Officer Philippe Dessureault, said, “The Czech team gave us a lesson on the field. They outplayed us and they were very physical. Thanks a lot to Jaroslav BÅ¾och and the CZRLA for the opportunity to play and for the experience we got out of it. Thanks to Paul O'Keefe and the Canada Rugby League Association for all the support. Now let's get up and look forward.” 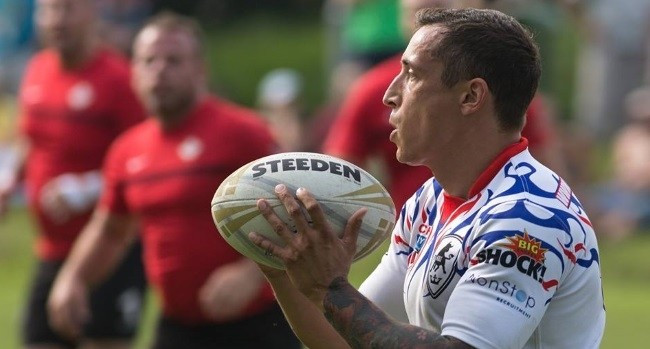