JAMAICA A v BARLA U23

BARLA Under 23s continued their successful tour of Jamaica with a clinical victory over the Jamaica A team in Kingston.

A good crowd came to watch a entertaining game and they weren't disappointed with some heavy exchanges in the first 5 minutes as both sides looked to find the first score. Jamaica threatened the line a few times, but BARLA opened up the scoring when Sean Leicester capitalised on a Jamaican mistake to score in the corner, although he did miss the goal attempt.

Jamaica were not taken out of their stride and showed some good play, with a 40-20 giving them excellent field position and they were unlucky not to come away with a score. BARLA weathered the storm and, on 25 minutes, extended their lead after some nice hands saw Danny Cahill cross over in the far right corner, with Leicester missing the conversion.

After half an hour, BARLA showed their greater experience to snach another try after a high kick and a Matty Elliot chase and steal in mid-air saw him run clear, although Leicester didn't seem to have brought his kicking boots as he missed an easy goal In front of the uprights. BARLA twice thought they had crossed for a try when a linesman give an in-touch decision as Cahill crossed and again when a crossing  call disallowed a Leicester try, but neither try stood and no more points were scored to leave the Half time score 12-0 to the touring side.

BARLA started the second half the stronger and, 5 mins into the second half, scored their fourth try of the day with a strong run from Ryan Bowie and a long arm stretch to get the ball over the line despite the best efforts of Wade and McKenzie in the Jamaican defence,  and Welsby kicked the goal.

As Jamaica started to take more chances, they left some holes in their defence and BARLA punished this as some nice play down the right side brought a chance, with Thomson making a show and go to release Creswell to score. Thomson then made his own try after a show and go dazzled the Jamaican line and sent Thomson on a 30 m dash to a well taken try, with Welsby continuing his good form in front of goal as he added the conversion for 0-30.

The Jamaicans continued to push the BARLA line but seemed to tire against their more experienced opponents and made more than a few unforced errors. BARLA capitalised on these errors and Slater cut through the defence to score a well-taken try, with Leicester finally locating his kicking boots and adding the extras for 36-0.

Leicester then got his second try after crossing the opposition line with a nice run down the right hand side, with Cahill getting his second try right in the whistle, with Leicester missing the conversion for a final score of 46-0 to BARLA 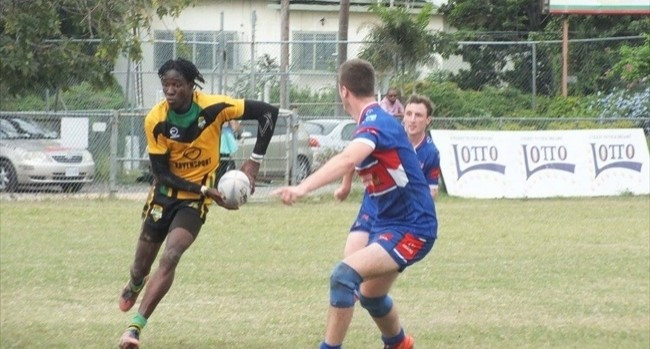