Wayne Bennett's men duly collected their first points of the Ladbrokes Four Nations Series with a 38-12 victory, but they could come to rue their awful start if points difference is needed to determine the November 20 finalists.

First England must topple Australia in London next Sunday and they will need to dramatically improve on their performance against the Bravehearts to get close to that.

With seven players from the second tier of professional competitions in England and Australia, the odds were stacked against Scotland, but they stunned their hosts at Coventry's Ricoh Arena by scoring the first two tries. England gradually recovered and stand-off George Williams boosted his chances of lining up against the Kangaroos, while Ryan Hall extended his record tally of tries to 30 in as many appearances and Luke Gale finished with 14 points from a try and five goals.

Led superbly by Danny Brough, once tipped to become the England stand-off, the Bravehearts dominated the opening 25 minutes and thoroughly deserved their 8-0 lead. Left centre Kane Linnett, who had caught the eye against the Kangaroos a week earlier, cast an imposing presence on England's right-sided defence and it was he who opened the scoring on six minutes, finishing off a slick handling move for the game's first try.

England had an equal share of possession but were unable to complete their sets and they fell further behind on 24 minutes when winger Matty Russell produced a miraculous finish.

The Irvine-born Warrington player was dragged into touch by Jermaine McGillvary and Kallum Watkins, but still managed to reach out one-handed to plant the ball on the line, demonstrating enough evidence for video referee Ben Thaler to award the score, despite match official Gerard Sutton indicating no try.

It could have been worse for England, for Brough was wide with both conversion attempts, and they managed to post a couple of tries in the last 13 minutes of the first half. Second rower Elliott Whitehead strolled through a gap from Gale's neat pass and then went over for a second after profiting from a fortunate ricochet from the scrum-half's grubber kick.

Gale converted both to put his side into a 12-8 interval lead and they went on to boss the show in the second half.

Whitehead went close to completing his hat-trick and Sam Burgess was held up over the line before the floodgates slowly began to open. Williams, growing into the game, made the running for Mark Percival's first try for his country and produced a sublime softly-struck kick for Hall to grab his 30th.

As Scotland began to fade, their last chance of pulling off a shock disappeared on 57 minutes when Brough was sin-binned for the latest in a series of professional fouls.

Full-back Jonny Lomax immediately took advantage of the extra man by working right winger McGillvary over unopposed at the corner and the Scots were still a man down when Sam Burgess' pass out of the tackle got Gale scampering away for his try.

Gale took his goal tally to four from six attempts to stretch his side's lead to 32-8, but Steve McCormack's men were in no mood to roll over. Last-ditch tackles from Lomax and McGillvary denied tries to Danny Addy and Linnett before Brough, just back on the field, got second rower Dale Ferguson charging over for Scotland's third try, although he was again wide with the goal.

England had the final say in stoppage time when second rower Liam Farrell went in for their seventh try, but they must wait to discover if it will be enough to take them all the way to the final. 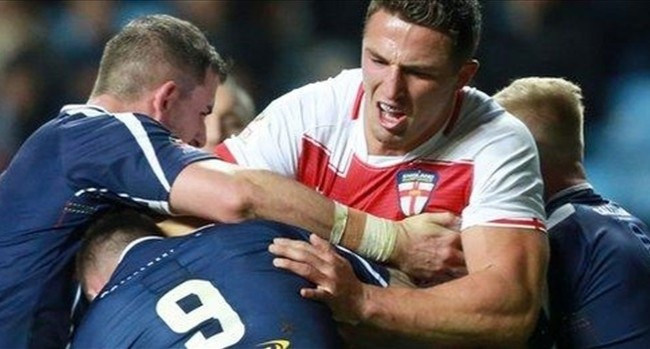