Scotland's Four Nations debut ended in a 54-12 defeat as a dominant Australia ran in 10 tries.

"The first 30 minutes we sat back and let Australia play and they were excellent," Scotland head coach Steve McCormack said. “When we got good field position we challenged them at times and our effort and determination at the back end was good."

Scotland face England for the first time in their 20-year history in Coventry on 5 November. England begin their campaign against defending champions New Zealand in Huddersfield on Saturday.

"We will get better as the tournament goes on," added McCormack. "We had to show a lot of spirit and we will certainly get better for next week."

Australia winger Blake Ferguson opened the scoring on the left, Cooper Cronk pounced on a clever grubber kick from Cameron Smith to score and then combined with Matt Moylan to put James Maloney in between the posts.

Debutant Tyson Frizell sent Cronk in from 30 metres, and Australia made the most of a Scotland in-goal drop out to put Josh Mansour over. The winger added his second with a dive into the corner.

Scotland, who qualified for the tournament for the first time by winning the 2014 European Cup, responded shortly before half-time when captain Brough's kick was deflected into the path of Huddersfield team-mate Brierley, who pounced to score on his debut. Although Josh Dugan scored immediately after the interval for Australia, a Brough interception helped put Bradford prop Kavanagh over.

Former Wales international Frizell reasserted the Kangaroos' dominance when he powered over, and tries from Michael Morgan and Jake Trbojevic soon followed.

The 'fourth' nation have never beaten Australia, New Zealand or England since the tournament was expanded from the Tri-Nations in 2009.

Brough said: "We have learned a lot. They outsmarted us and we probably got what we deserved. We have to take the good spells and make it into a consistent half.

"I'm proud of the lads - they put that jersey on and wore it with pride. We are not expected to win a game but we have to see if we can upset the apple cart once or twice." 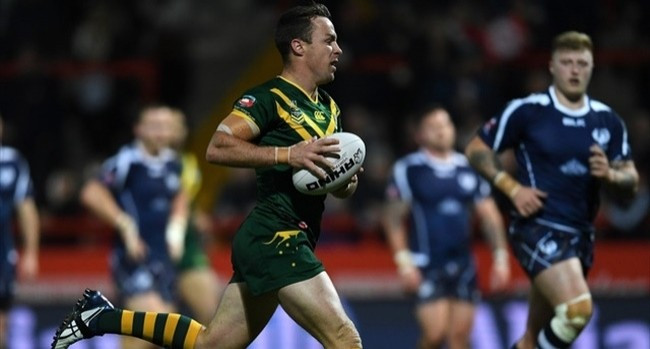