The Azzurri now face Wales in Monza next Saturday, the winner securing the automatic place from Pool A, with the loser going into the qualifying play off.

Campese, on international debut, had a hand in all his side’s best work, helping to carve out a hat trick of tries for winger Richard Lepori inside the opening 12 minutes, and nipping over himself from a quickly taken tap penalty just before the hour that fooled the home defence. Former rugby union centre Mirco Bergamasco, also making his international league bow, kicked seven goals from 11 attempts as the Italians look to secure their second successive appearance in a World Cup.

Head coach Cameron Ciraldo commented: “It was a good start to the tournament with limited preparation time, we only had three sessions together and we’ve still got plenty to work on. Serbia were physically tough and the crowd was very much into it, and it was a great atmosphere for the boys.” Ciraldo added: “Our good start was crucial but the last 20 minutes weren’t so good and we have to work on that. We have a full week ahead of us to prepare for the game against the favourites in our group, Wales.”

The visitors effectively had the match won inside the opening half hour, crossing for five tries to build up a 26-0 lead, full back Mason Cerruto and prop Shannon Wakeman with their other touchdowns.

Miloš Ä†alilÄ‡ was penalised in possession for moving off the mark as Serbia attempted to stem the tide, Cerruto going 70 metres in return to clock up his second, Bergamasco with the touchline conversion to make it 32-0 at the break. Cerruto’s break from the back set up the next try six minutes into the second half, Brenden Santi the beneficiary from Campese’s swept pass and Ryan Ghietti’s clever grubber to the corner.

Parramatta custodian Cerruto scored on the next set and, from a goal line drop out, Campese, Ghietti and Christopher Calegari sent in Lepori for his fourth try. Campese danced across to bring up the half century as the Serbians struggled to control the speed of the play the ball, Campese and Cerruto again heavily involved as Calegari deservedly crossed soon after.

Cerruto was denied and Vojislav DediÄ‡ smothered a Campese kick, winger Joshua MarjanoviÄ‡ striding clear from 70 metres to register the host’s first score in the corner after 68 minutes.

Santi, Calegari and Ghietti with an inside pass enabled ever-dangerous Cerruto to claim his fourth but the Serbians finished strongly with two more tries down their right hand side, Daniel Burke breaking clear and Vojislav DediÄ‡ converting from the touchline, and MarjanoviÄ‡ picking up his second in the final play.

Under pressure after their defeat in Wales in game one, the Serbians were hurried into mistakes early on that were ruthlessly punished, but the way they ended the game offered some consolation to head coach Ljubomir Bukvic.

“The Italians were clearly better than us,” he noted. “We, again, had only a 30-minute spell where we played well, which is not enough for a match like this. We are naturally disappointed to be eliminated but, as a result of this competition, we would like to maintain our good relationships forged and I hope we can play more Test matches like these in the future.” 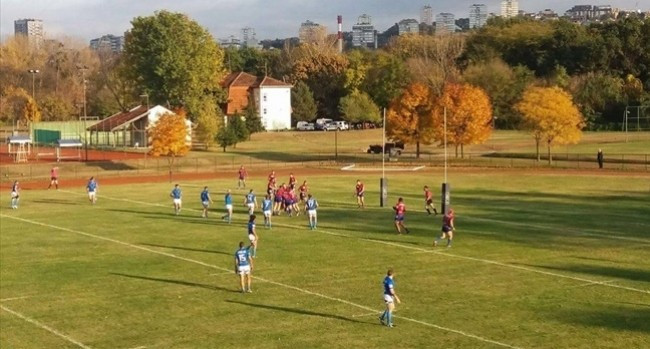