Two second-half tries from winger Rob Armstrong helped Ireland come from behind to beat Malta 34-22 in a friendly at the Melita Ground in Malta on Saturday night.

Ireland wasted no time getting on the board, with man of the match Gareth Gill touching down in only the third minute, Casey Dunne kicking the first of his five conversions for the night.

Sam Blyton-Keep got the home side on the score sheet courtesy of a penalty goal after 10 minutes.In a physical affair, the Maltese and Irish level-pegged throughout the first half, Jean-Pierre Zarb getting Malta’s first four-pointer after a nice backline movement.

With some vocal Irish support of their own, Conor Mackey touched down for the visitors and prop Jake Lynch put Malta’s noses in front again on the half hour.

On debut, the Medway Dragons’ centre Kaine Dimech scored and Sam Blyton-Keep slotted the extras to give Malta an eight-point lead at 20-12.Skipper and fullback Casey Dunne kept the Irish hopes alive as he converted his own try on the stroke of half time.

After a half that saw each team heap pressure on themselves with handling errors in their own half, the teams returned for the last forty with referee Aleksandar Markovic warning both teams of infringements he would not tolerate in the final stanza.

After the expected tussle in the third period, centre Clark McAllister then gave Ireland the lead late in the match, a 24-20 lead they wouldn’t surrender.

Armstrong crossed with 12 minutes to go, and with Malta attacking the Irish line in the dying stages, he took an intercept and raced 80 metres to seal his double and a Wolfhounds victory.

Malta skipper and interim head coach Chris Parker said the contest against the Irish was one of the toughest he’d played in, and singled out the Malta wingers for praise in a solid team display.

“It was one of the most physical games I’ve been involved in. And the players really stood up” said Parker. “Our two wingers Julian and Jean-Pierre were excellent, coming in and taking some of the pressure off the middle”.

Malta’s Andrew Muscat was named as Malta’s best, Ireland’s Gareth Gill the player of the match.

Malta’s next clash is against Spain in Valencia on September 26. 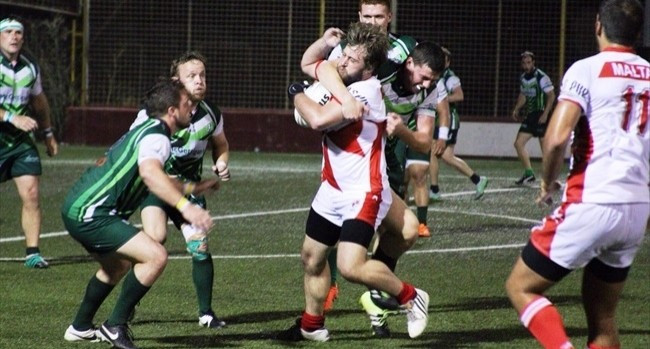