Canada staged a remarkable comeback to set up a winner-takes -all match against USA on Saturday, scoring 18 points in the final 17 minutes to eliminate Jamaica from the Firehouse Subs World Cup Qualifiers – Americas, at the Spec Martin Stadium, DeLand, Central Florida.

Jamaica, narrowly beaten by the USA four days before, looked to have pulled off a famous win, Wayne Rettie’s try in the 53rd minute seeming to put the Reggae Warriors back in the qualification mix, but the Wolverines hit back spectacularly, full back Robin Legault crossing for two tries in three minutes in an astonishing climax.

There was more drama at the last, when Canadian scrum half and co-captain, Steve Piatek – who had landed an equalising conversion from the touchline to Legault’s second try, missed with a final second drop goal attempt.

“I’m proud of the performance from the team,” said shattered Jamaica head coach Romeo Monteith. “There’s no shame in losing to the world number 10 by six points and drawing with the world number 12 in these qualifiers. We tried our best and I wish we could have held on at the end but it wasn’t to be and we have to move on.

“Canada had more urgency towards the end. They had one particularly dangerous play, turning the ball inside from the play the ball to the full back that kept opening up our middle. We needed more discipline there; we were calling for the team to be tighter around that area but we weren’t.”

Monteith brought Hamish Barnes into the starting line up and his side made the perfect start despite backing up, catching the Canadians cold in dewy conditions that led to frequent dropped ball, although some of the defence was spectacular.

Lamont Bryan opened the scoring in the 21st minute, barrelling over from close in, Joel Farrell converting and, five minutes later, the Jamaican lead was doubled, crisp passing seeing Corey Hanson and Richie Barnett combining to send in winger Alex Brown for a lovely score, Farrell wide with the conversion.

Farrell landed a penalty that extended the lead to 12 points and, into the second half, his cross-field kick was snapped up by Rettie who went over, Farrell with the extras.

Jamaica substitute Tyrone Rowe was sinbinned just after the hour and that was the catalyst for the Canadian comeback, tricky Ryley Jacks crossing on the next set and Piatek on target with the boot.

Farrell missed another penalty and that gave the Wolverines a second life line, Legault’s raids from the back making the most of the opportunity, his second score coming on the end of a sweeping move that saw him go over in the corner, Piatek holding his nerve with the conversion.

Aaron Zimmerle, in his first game in charge of Canada, said: “Calling our performance mixed would be a good description. There were a couple of sets where we were as professional as it’s possible to be – our first of the game saw us go 92 metres, finish with a kick to the corner and it looked like we were in for a good day, but then there were others where we knocked on cold off a scrum.

“A lot of that comes with continuity and through fatigue. It was Jamaica’s second game and they played a lot better than they did against the USA. They completed more, they seemed to play to their strengths, using their speed and agility, whether coming out of dummy half or shifting to the edges, but the character the players showed to come back from 18-0 and to almost conjure a drop goal in the last minute is a great credit to the boys.” 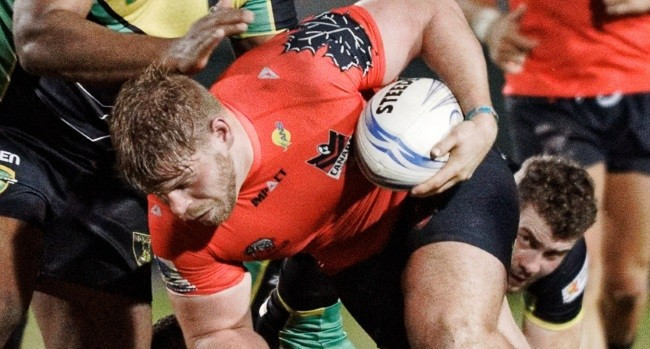