A late try from Ireland fullback Scott Grix consigned Scotland to a 24-22 defeat in an entertaining Rugby League European Championship clash at Galashiels. After trailing at the break, a second half comeback edged Scotland ahead, but Grix’s late weaving score clinched victory for the visitors and consigned the Scots to their second defeat in this season’s competition, leaving them with no chance of retaining the title they won last year.

“When you have people like Bob Beswick, Liam Finn and Grixy it calms us down,” said Ireland coach Mark Aston. “I thought Will Hope was absolutely enormous for us as was Oliver Roberts. The pack of forwards worked really hard and that’s where the win was based. We got our just reward. “We had some domestic players on the bench so it’s a nice blend. They’re a good group and they don’t cause me any problems. We’ll have a bit of a celebration tonight and then a bit of a break.”

Ireland now join Wales and France on one win apiece, with those two sides set to meet in Cardiff this coming Friday.

Scotland started well, enjoying the better of possession and territory in the initial minutes, but it was Ireland who opened the scoring on their first real attack, Luke Ambler charging over from close range for a try next to the posts which was converted by Finn. An injury to James Mendeika led to a five minute stoppage shortly afterwards, with the Bradford Bulls man eventually being helped off the pitch after treatment, but it didn’t upset the Irish rhythm as they scored almost immediately when play restarted, with Brad Hargreaves going over in the corner after a break down the left.

Scotland hit back and after a strong run from Oscar Thomas earned them a penalty on the ten metre line, the ball was fed out wide to Danny Addy, who darted through a gap to touch down for an unconverted try. A high kick from Bravehearts skipper Danny Brough on to the Irish goal line created a chance on 30 minutes but despite desperate attempts by both Shane Toal and Richard Harris to get a hand on the ball, the chance went begging thanks to good defensive cover from Hargreaves.

Good Irish pressure then had Scotland on the back foot and, after a desperate tackle from Dale Ferguson, Scotland’s respite was only temporary as Ambler powered through for his second try next to the posts, leaving an easy conversion for Liam Finn.

The first half ended with Finn opting to kick for goal when Ireland were awarded a penalty just inside the Scotland half, the Irish captain increasing his side’s lead to 18-4 at the break.

The Scots needed a good start to the second half and within three minutes they reduced the arrears with a surging run from Brough taking them to within 20 metres, which created an opening for Addy to cross for his second try which Brough converted. It got better for Scotland four minutes later when Barrow’s Toal marked his full international debut with a try, going over in the right hand corner following a sweeping move, and Brough landed a difficult conversion from the touchline to bring Scotland back to within two points.

As the hour mark approached, a mazy run by Elliot Cosgrove took him past several challenges and to within a metre of the Scottish line, and when the ball came back Finn went over but was held up by good Scottish defence. Soon after, Scotland took the lead for the first time, with a Brough pass creating an opening for Dale Ferguson who weaved his way past two tackles and charged over for a fine score between the posts, leaving Brough with an easy conversion.

Seven minutes later, Scottish pressure almost brought another try on the last tackle, when an Oscar Thomas pass found Alex Walker in space on the left wing, but despite his desperate attempt to touch down in the corner, the referee ruled the ball had not crossed the line. Despite being on the back foot, Ireland landed the killer blow with what proved to be the decisive score eight minutes from time.  A terrific break from Ben Johnston took him deep into the Scottish half and a fine pass inside sent Grix over for a try which Liam Finn converted to clinch a narrow win.

Scotland coach Steve McCormack noted: “The intensity in the first half wasn’t there. In international football you can’t dip your toe in and it was similar to the game in Wales last week. We gave ourselves a lot to do after the first half. In the second we were great though and young lads like Shane Toal, Richard Harris and Alex Walker did very well and will be better for that experience, but we don’t like being gallant losers.

“We looked after players like Bob Beswick in that second half and Liam Finn, but if you clock off at this level you get punished, and the only time we did, that showed.” 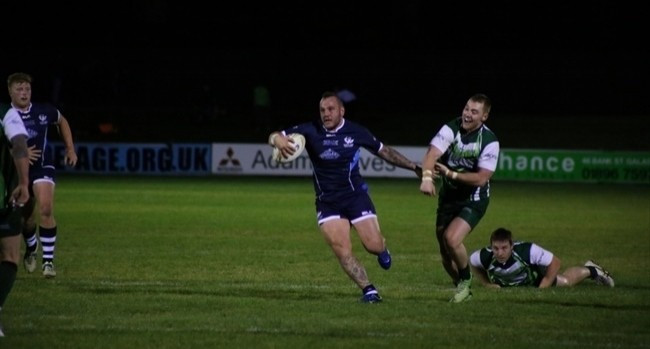