Wales made the perfect start to their 2016 European Championship campaign with a hard fought win over holders Scotland in Wrexham on Friday. It ended a run of a record 12 consecutive defeats for the Welsh going back four years so the victory naturally led to raucous celebrations at the final hooter. The Welsh were deserved winners as they were outstanding in both attack and defence. The Scots gave it their all but they were unable to break the wall of red when it mattered.

There was an early chance for Wales to take the lead in the first few minutes but Rhys Williams was pulled into touch when going for the line. At the other end, Scotland had their first chance after just six minutes. Liam Hood and Danny Brough combined to set up Danny Addy but pressure from the Welsh defence forced him to drop the ball when diving for the line.

And from the next attack, a piece of brilliance gave Wales the lead. Out of nothing, Steve Parry jinxed through the Scottish defence and placed the ball under the sticks. Courtney Davies converted. A dangerous tackle on Davies gave Wales a penalty under the sticks and the same player increased Wales’ lead to 8-0. Scotland pulled a try back on 27 minutes when Dale Ferguson left the Welsh defence standing to score under the posts. Brough easily converted to bring the score back to 8-6. But an excellent passing move set up Dalton Grant whose acrobatics gave him a try in the corner. Davies’ conversion attempt was just wide giving Wales a slender one try lead at the break.

Wales defended well at the start of the second half, preventing the determined tartan army from crossing the line on more than one occasion in the first 10 minutes. Fifteen minutes in and, with Scotland still pressing, a cheeky kick from Hood was cleared up by Elliot Kear but Scotland had won a goal-line drop-out. The same player’s grubber from the resulting set wasn’t picked up any of his team-mates and Wales won possession back.

Wales weren’t leaving anything to chance and were taking their opportunities. As Scotland gave away a penalty 25 metres from their own line, Davies made no mistake with the kick to make the score 14-6.They followed that up with a try on 64 minutes. Rhys Williams fed Ollie Olds who in turn opened up a gap Anthony Walker to run home. Davies missed the kick.

Solid defending kept Scotland at bay as they looked for a try back, with every Wales player giving 100% to keep the potential Scottish playmakers out. The Welsh defence did fold with two minutes to go as Danny Addy set up Oscar Thomas who out ran the tired Welsh defence, but he was forced into scoring in the corner. It didn’t worry Brough who landed the extras to make the score 18-12. An Scotland error from kick-off gave Wales the ball back but Davies, who looked to seal the game with a drop-goal, saw his effort go wide.

“I’m absolutely delighted,” said Wales coach John Kear. “I thought in the first half we played a controlled composed game. Obviously there are things that we could have improved upon, one being the penalty count. But the way we defended in that 15 minutes after half-time, that showed we have a team, because we were under the cosh, tired and somehow managed to diffuse the Scottish attacks, holding people on the ground, picking up balls. I take great heart from that and I’m immensely proud of the players’ efforts tonight.”

Scotland coach Steve McCormack was naturally disappointed but accepted that they were beaten by the better side.

“Wales were good,” he said. “You always expect that from a John Kear coached side. This level is all about small margins and they did the simple things really well. They didn’t test us out wide, they just took things up the middle and we gave far too many penalties away. We came back well and had a chance of drawing but we couldn’t get the ball over the line. Two or three times we got held up and that’s credit to Wales.” 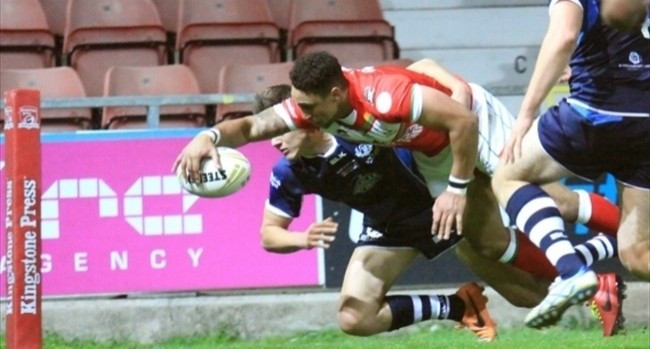