Germany, fresh from winning away in  Spain, defeated Holland 46-12 in Gnarrenburg. With all but one of their side coming from the domestic league, including 17-year-old Matej Beslic, the hosts opened the scoring after five minutes when Oxford’s Andy Hoggins crossed, Mitch Every converting.

Marco Kühne scored his debut try for his country, Every doubling the lead and his kick released local boy Jannek Hagenau for the next score, to delight the crowd of over 300.Beslic then scored a superb solo effort as he took on the Dutch defence on the outside and romped 60 metres, Evers adding the extras.

German captain Mawuli Amefia was heavily involved and, just before the break, was on the end of a flowing move, Evers goaling to make it 28-0 at the interval. Amefia grabbed his second try after 70 metre dash, Evers goaling but the Dutch then showed great spirit as they worked their way into the contest.

Impressive second rower Timothy Ddumba opened the scoring for the visitors, and got his second soon after; Uri Breman uwen converting both tries as they dominated the third quarter. Arne Falk got Germany back on the scoreboard, Evers on target and, in the closing moments, Liam Doughton scored from a quick play the ball, Evers with his seventh goal from eight attempts.

“The Dutch gave everything and made life hard for us,” said German co-coach Simon Cooper. “The score doesn’t do justice to their efforts. “We can do better and performances mean more to us at this stage. Now our efforts in Germany will change to our domestic activities with a 9s Series starting on 4th July in Gnarrenburg. With a decent crowd and TV and Radio here, it’s been a great day and gives rugby league in this area near Bremen something to build on and to increase our profile.”

Netherlands coach Kane Krilic said: "We knew our backs were against the wall today; not only did we have nine players missing from the squad that played against Belgium, then from the new players we brought in we then lost our pivot, full back and centre two days before kick off. Due to this unsettled preparation we knew we had to start strong as the Germans would be high on confidence and we needed to work ourselves into an arm wrestle. Unfortunately for us, Germany started very strong and scored a couple of quick fire tries which meant we were chasing the scoreboard.

"At half time I asked the players to test themselves mentally, forget about the scoreboard and get back to the processes we had been working on. Credit to them, after half time they grew into the game, never gave in and started to show some nice structures with and without the ball. If the guys keep showing that kind of mental toughness and keep testing themselves, the development of the national team will rapidly increase. Certainly the players that were not available for this game need to show the same kind of mental attributes and prove a point otherwise they will have a very hard time getting back into the national squad." 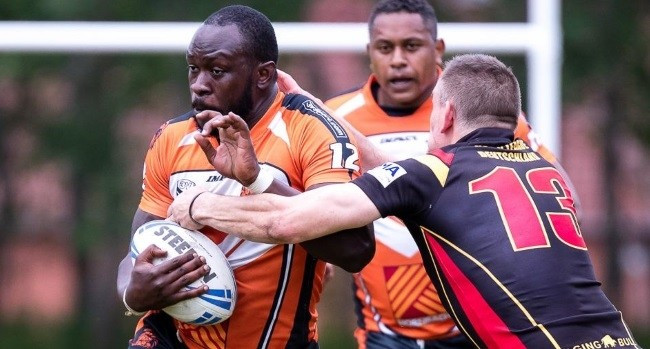