An 80th minute drop goal by stand off Vojislav DediÄ‡, secured one of Serbia’s best-ever results and ensured them a place in the 2016 European Qualifiers for the World Cup, which takes place the following year. Their 21-14 triumph in Gemona, after a 20-15 home success over Russia, sees them four points clear at the top of the European Championship B table with four wins from five, the top three nations going through to the Qualifiers next year on the road to the Antipodes. The disappointed Italians, who stay level with Russia, now need a win from one of their final two group games to join the jubilant Serbs next autumn.

Serbian head coach Marko JankoviÄ‡ commented, “I was really thinking a lot about this match beforehand and that Italy have a lot of experienced players used to close games. We had a good state of mind within a group that is largely unused to this level of competition, and playing at such a high standard in consecutive games. It was psychologically more difficult than playing against Russia who are more direct in their style, like us.”

He added, “This is an important result for us, our first away win in this competition, and although we have guaranteed qualification, the job is not done; we want to win this championship.”

Serbia were never behind, leading 10-0 going into half time and surviving an Azzurri second half fight back in a match that was tense throughout. Dalibor VukanoviÄ‡ missed an early penalty, Miloš DjurkoviÄ‡ with the opening try in the 11th minute, Vojislav DediÄ‡ – who took over the goal kicking duties – converting. Two more Vojislav DediÄ‡ penalties, in the 18th and 23rd minutes, kept the scoreboard tacking over as Serbia enjoyed the lion’s share of possession and territory, making few mistakes.

Ariete Este winger Simone Boscolo came infield and sneaked over from dummy half by the posts six minutes before the break to give the hosts heart, Remi Fontana goaling to narrow the gap to four points.

Like in the first period, Serbia were again impressive at the start of the second, spreading the ball wide for winger Dragan JankoviÄ‡ to cross for an unconverted try. Prolific and powerful centre, DorÄ‡ol’s Stevan StevanoviÄ‡, muscled his way over in the 51st minute, Vojislav DediÄ‡ adding his fourth goal, but Italy hit straight back, a superb, weaving 75 metre run by full back Richard Lepori taking him over too far out for Fontana to goal.

In the 66th minute, Andrea Gazzoli pounced on a loose ball after a high kick had been fumbled by his opposite number to set up a nervy ending with only a converted score between the sides. But man of the match Vojislav DediÄ‡ kept his nerve to slot over the decisive one-pointer just before the whistle.

Italy scrum half Remi Fontana acknowledged, “It was a tough match, they defended well. We never really got on the front foot or developed our style of play. Against Ukraine we will have to win the collisions and do more with the ball.”

SRLF vice president, Nebojša SretenoviÄ‡, said that the result had massive significance for the sport in Serbia. “This is a very important victory for us,” he noted. “It has been achieved with a team almost exclusively from the domestic league and that shows all who play in it what is possible. The excitement is big making the World Cup qualifiers but we want to enter them in style by focussing on the final match in this competition and winning the trophy.” 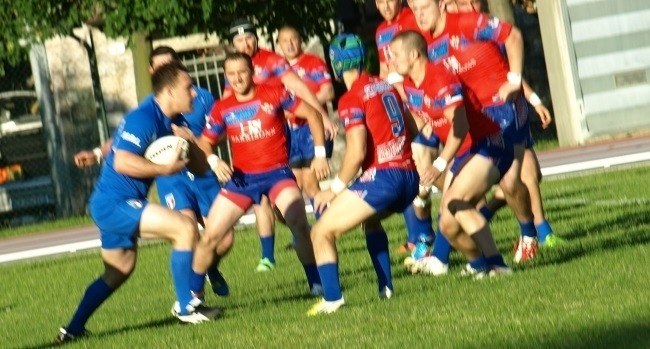