EUROPEAN SHIELD GAME 2
The Czech Republic’s hopes of claiming the Rugby League European Shield, following their convincing win over Germany last week, were left in tatters after holders Italy put in a clinical performance in Jesolo, near Venice. The defending champions were convincing 38-8 winners against a determined but ultimately outgunned Czech Republic outfit, who fell away in the face of a second half onslaught.

Italian coach Tiziano Franchini was pleased that his new-look side had overcome a tough obstacle. “It was a very good game” he said. “We knew the Czechs were coming to win the European Shield and they were very aggressive but we were able to match them. I am happy about the development of new players this year with eight of the 17 drawn from our local clubs and new to the national team. They have a good chance to grow with the game now, they're in love with Rugby League.”

Former Keighley Cougar Marco Ferrazzano was the Azzurri's architect of victory, punching large holes in the visitors' defence and scoring two long-range tries in the second period against the brave Czech rearguard. By that time, however, the game was beyond the men in red, and they were in part responsible for their own demise through a series of damaging lapses in concentration and discipline that handed Italy the initiative.

Impressive prop Angelo Ricci give the hosts a 4-0 lead after 10 minutes with a storming break and Italy doubled their advantage on the back of three consecutive penalties conceded around play the ball by the visitors. From that attacking position, Hunslet Hawks forward Jason Dubas-Fisher sliced over running a good line, Filippo Veronese - who had a wayward day with the boot - missing his second conversion.

The visitors halved the lead through Tomas Holovsky on 28 minutes, capitalising on the determined start they had made to the game to catch the home defence back-pedalling. Another of Italy’s English-based players, full back Eduardo Lerna then took advantage of one of the rare instances of sloppy Czech defending when he cut through on 33 minutes, Veronese's conversion making it 14-4 at the interval.

Still in the game, the Czechs immediately self-destructed at the re-start, sending the kick off to the second half out on the full and, within a minute, conceding a try to stylish centre Giovanni Franchi

It was a decisive moment which put the game mentally beyond the Czechs who, despite holding out bravely for another ten minutes, conceded two tries in quick succession just before the hour to Nicola Facco and Ricci, as the blue-and-whites took control.

Ferrazzano, who along with Ricci had set a solid platform in the middle for Italy's backs, then went on the rampage bursting through on 62 minutes after yet another Czech penalty and then again seven minutes later. Fittingly, the Czechs - who had registered their maiden international victory last week - had the last word when young winger Christian Ernst hacked ahead and won the race to the ball to touch down as the hooter sounded.

Czech supremo Milan Myrtinek was realistic in his appraisal. “Credit must go to the better side” he commented, “we couldn't cope with their class, especially in the second half. We wanted it so much but errors cost us dearly, if you can't convert your attacking positions you won't win. Overall I was very happy, though. We had five boys from the army who have only been playing for two and a half months and who had no previous rugby experience at all. We've shown a bit of courage and endured a bit of pain; we weren't able to lick the ice cream but tasted the dirty water.”

Italy travel to Huerth, outside Cologne, next weekend in pole position to reclaim their crown. 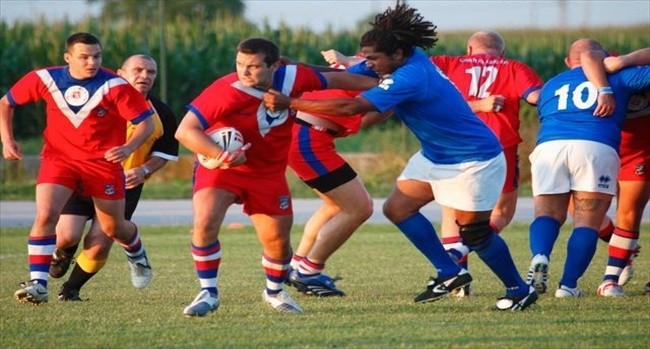