The debut meeting between the two national sides was held in the picturesque town of Torrent. The town is not your typical place for Rugby league but the young Spaniards stepped up to the challenge with a hearty performance and with some of the players only previously playing two games. The game and the tour has been overseen by Daz Fisher the Spanish national coach.

The game kicked off with a dominate start from the Young Lions with three unanswered tries by Joe Willock, Jordan O’Leary and Mathew Johnston two of the three tries were converted by Joe Willock.

After the impressive start by the Lions the young Spaniards started to get to used to the pace of the game and after some impressive hands the elusive Danny Garcia touched down and added to the points with his own conversion.

The game was evenly contested for the next ten minutes until the break in the stale mate was broken by Joe Willock after a good bit of support play from the young full back with a touched line conversion made the score 22-6. The Lions followed up with another try straight away through Jack McConachie all the time being dogged by aggressive Spanish defence. At half time the score was 26-6.

The second half kicked off under flood lights with a strong onslaught from the Lions however the Spanish defence managed to hold out until the 50th minute when Will Johnson scored in the corner with a unsuccessful conversion. The Lions followed Johnson’s try up with a well-executed set piece scored by Caden Wilkinson with a conversion from Dean Rooney.

The Spanish continued with their resilient performance and scored the following two tries through the Spainish left centre and Danny Garcia, who converted both tries. The score was brought to 36-16.

The Lions stepped up a gear in the last 15 minutes and scored four unanswered tries through Jordan O’Leary, Will Johnson, Jack Townend and Karl Hunt. The tries were converted by Joe Willock which brought the final score to 60-18. The man of the match performances were contributed to the Spain number nine Gonzalo Morro and BARLA number nine Bradley Gott.

The game was an exciting first test between the two sides and credit needs to go to the Spainish players and staff as an emerging nation in the sport. The next test is due to be played on Thursday at 9.30 pm against the Spain u 23’s in Valencia. 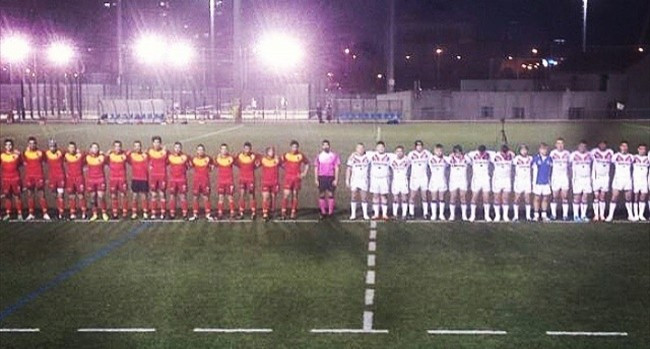