EUROPEAN SHIELD GAME 1
Two tries in three minutes around the hour mark, from winger Pavel Navratil and hooker Jarda Stribro, saw the Czech Republic register their first ever win at senior level, with a 30-4 success over Germany in the opening game of the European Shield in Olomouc.

There was little between the sides in a tense first half, Zdenick Zahrada opening the scoring in the 13th minute for the hosts, Richard Hladik and a Milan Kuchera goal making it 10-0 at quarter time. Just before the break the Germans responded, centre Jim Keinhorst crossing, but four minutes into the second half Tomas Helovski put the Czech Republic in control, Michal Priputen adding the extras.

The double try blitz gave the hosts the scent of victory and skipper Priputen sealed it with a 66th minute touchdown. The captain commented, “I’m proud of this first victory in Czech Republic RL history. We have a new team with five players making their debut but we worked more than previous years with local preparation. We hope we can do as well against Italy but we know they have a very strong team.”

Czech coach Milan Mrtynek was an understandably happy man. “I’m absolutely delighted with the win” he commented. “We wanted it so much. The hot conditions were very difficult for everyone involved. Our forwards played well and the team improved as the match went on. Barcelona helped with our preparation and in some stages of today’s game we managed to give our backs the ball in space. We shouldn’t overstate this result as we know the strength of the Italians but we hope to make next week’s game as tough as possible for them.” 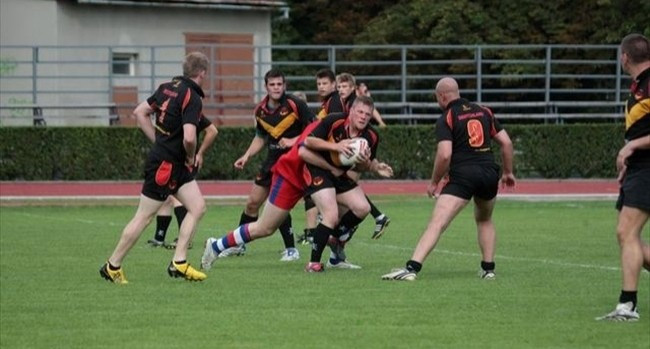