International rugby league for two novice nations at the home of where the first international was played in 1908 produced a stunning game, Danny Burke’s drop goal five minutes from time giving Malta a one point win.

Belgium, ranked 10th in the European rankings, against a side five places below them, scored seven tries to six, Yann Leroyer with a hat trick; goal kicks ultimately costing them.

Post-anthems, Belgium made the perfect start although there was an element of fortune about the score. Livewire scrum half Kamel Belkiri put up a towering high ball to the posts, Malta full back Paul Parkinson spilled it but seemed to be pushed and Leroyer dotted down between the posts and converted.

On the back of a penalty, Malta equalised, James Redman – who was quality throughout – scooting over from dummy half for a fine solo try, Blyton-Keep levelling. Karnik Avedikian, who ran some great angles, lost the ball after a good break and Malta capitalised, Redman and Blake Phillips carving out the chance for Malcolm Attard to go over on a diagonal run, Blyton-Keep goaling from out wide.

Malta put the ball out on the full and gave away a penalty, Belkiri sending Agim Coroli close and then Nicholas Bourgin over, Leroyer’s conversion hitting the post.

Belkiri kicked a 40-20 and Belgium took the lead on the back of it, Leroyer and Belkiri sending Avedikian over out wide, again Leroyer’s goal attempt hitting the upright.

Two tries in as many gave Malta the ascendancy going into the break, Attard with the run that set the position for prop Jake Lynch to power to the posts and Phillips with a fine 30 metres dash to the corner, Blyton-Keep missing his first shot at goal. Just before the break, Belkiri jinked over but lost the ball in trying to put it down, which ultimately proved costly.

Malta looked like they had sewn up the spoils eight minutes into the second half when they established a 20-point lead, Attard capitalised on a knock on to step to the posts for his second score and, after he had been held up, Blyton-Keep twisted over.

With his fifth goal, Malta had a seemingly unassailable 20-point lead but the next 20 minutes belonged to Belgium as they drew level thanks to the superb intervention of Lyon centre Yann Bertand.

Damien Parée’s break saw Leroyer, Belkiri and Jonathon Bouillon send in winger Iliass Laachiri with a fine somersault but he missed the goal.

Bertrand’s superb break down the middle and brilliantly timed pass put Leroyer in at the posts and Laachiri goaled to narrow the gap to six points. Leroyer’s hat trick try saw the game level, the stand off snaffling a ball from the base of a Malta scrum and romping 70 metres for a terrific score.

But it was not enough, Bertand had the ball forced in a terrific tackle from Attard and Burke did the rest.

Both sides were cheered from the field after a sensational contest. 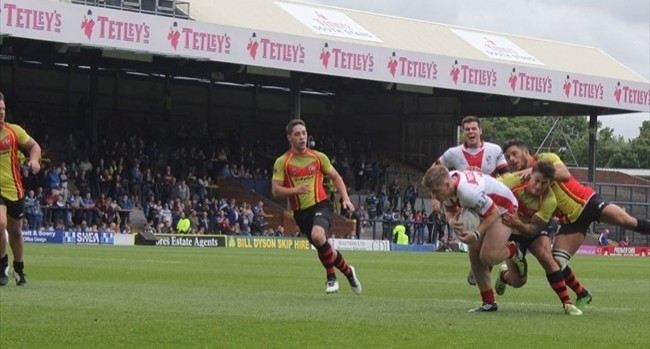