England Academy secured a memorable victory over the Australian Schoolboys at Leigh Sports Village, ensuring that they shared the two-Test 2014 Autumn International Academy Series. Wigan Hooker Luke Waterworth was utilised as a substitute, Nick Gregson missed the game through injury with Oliver Gildart in Florida on a warm weather training exercise.

The fiery encounter in Leigh ended with both sides stood arm-in-arm when presented the shared honours, though it was the home side that were the happiest after beating an old foe for the first time since 2010.

"That was a great response," said Richard Marshall, after completing his first series as England Academy coach. "We were bitterly disappointed last week and this week we are the complete opposite - we are ecstatic.The boys got what they deserved, they worked really well this week and put in a strong performance for 80 minutes. They scored some really nice tries as well. The conditions were appalling, it didn't help either team, but I think our guys defended resolutely and really worked hard for the victory."

A bitterly cold night in Leigh was not the place to put in a lukewarm performance for an England side looking to bounce back from defeat six days prior. Perhaps buoyed by the presence of James Graham in the stands - the senior international presented match shirts to the players the day before - it was just as well that the hosts came out in red-hot form. England needed only 75 seconds to register the game's first try. Gifted a penalty ten metres from the Australian line, the Academy worked the game's first set right through full-back Ash Golding, who found Ash Handley ready to take advantage of a small opening.

In England's very next possession, Jack Logan showed strength to gain ground down the right wing, offloading smartly to Handley who cut inside to stride 30 metres before being brought down. Jordan Abdul's grubber eventually bobbled long, but England's early attacking intentions were clear.

Australia's attacking threat was, as in the first game in this series, ever-present. Latrell Mitchell's explosive power from full-back helped the Schoolboys gobble tens of metres per set, and on a number of occasions England relied on the sharp eye of man-of-the-match Golding to cut out Brock Lamb's probing kicks. The Schoolboys managed their own try within 20 minutes. Having elected to run a penalty 15 metres from England's line, the Academy looked to have survived an onslaught from Ray Stone and then the equally-large Ash Nisbet, however Mitchell's eventual inclusion in the attack proved one powerhouse too many for England, as the Sydney City Roosters man burst through to just about make the line.

From a similar position Nisbet went over on half an hour but Newcastle Knights player Lamb, finding it difficult in the blustery Lancastrian conditions, dragged his second conversion in succession wide of the sticks. That kick could have brought the tourists level going into half time, for England had already registered their second try of the night. Joe Keyes's kick to the right corner was met by Hull FC's Logan who, unchallenged, plucked from the air to touch down. Abdul couldn't add to his earlier conversion, shaving the post from a difficult touch-line kick.

The swirling sleet relented for the start of the second period but, for large parts of the second half, the Schoolboys' attacks didn't. Huddersfield Giants' Mikey Wood did break through to gain nearly 40 metres, only for Mitchell to retrieve and make 20 of those straight back. Jacob Liddle was able to dive in under the sticks - a score easily converted by Lamb - after good work from Stone in the build-up, and they would have had another soon after had Gideon Gela not run out of steam in a length-of-the-field break - Golding again came to the rescue for the Academy.

Only fleetingly were red shirts able to advance but, firstly through Jansin Turgut, England made their attacks count. Golding, lucky to still be on the field after a heavy collision with an advertising hoarding, made ground towards the left, winning the penalty from which captain Turgut was able to capitalise on. A second foray forward resulted in a fourth try for the home side, albeit via an ounce of confusion. After Ted Chapelow was tripped chasing a high bomb, referee Tom Grant allowed play to continue and from the ensuing mêlée Leeds Rhinos' Robbie Ward pounced.

The momentum was now with the home team, and again England found themselves ten metres out, in front of the tourists' posts. They worked the ball left through Abdul, then Toby King, before Jack Johnson found himself in possession in the corner. With three green and gold shirts bearing down, he skipped back inside, selling all markers the dummy, to dart over and seal a memorable win for England.

Ward and Australia's Tom Amone each saw yellow for their parts in a brief brawl in the aftermath of England's winning try, though the performance of referee Grant and his officials - all of the same academy age as the players - must be commended for keeping control of a match which, a number of times, threatened to boil over.

Not that this detracted from an enthralling encounter, one which has given Academy coach Marshall plenty of hope for the future. "We had a lot of players playing injured today, and out of position - for some it was the first time they had ever played together - so, to put all that into the mix, we were really pleased." 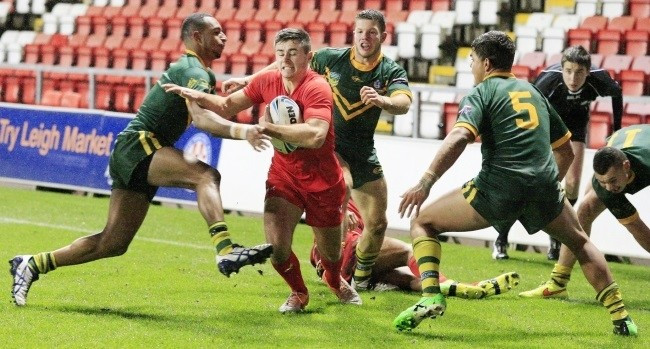