A hat trick of tries by RC Vereya centre Petr Botnarash – who was also sinbinned – proved to be the difference as Russia defeated Serbia 36-28 in Belgrade to take the Milan Kosanovic Cup, as part of the 2013 Rugby League World Cup Qualifiers.

Neither nation could make the group stages of the World Cup after European Zone Qualifier defeats to Italy and Lebanon but staged their own battle for the newly inaugurated trophy after both had beaten Ukraine during the summer.

"I'm delighted that we were able to pick up the win,” he said. “Some of the team management and players expected us to, which made it difficult for the team not to be over-excited. We knew that they were well organized but at 16-0 ahead we thought we were going to walk away with it and they came back strongly."

The visitors opened the scoring in the fifth minute, through winger Alexey Volkov after the Serbians had lost possession on their own 10 metre line following a Russian kick on the last tackle.

Serbia dominated the next quarter hour, gaining repeat sets on the back of three penalties but they were unable to score against resolute Bears defence.

Two tries in as many minutes, sandwiching the yellow carding of Miloš Ä†aliÄ‡ for an attack on the kicker, both to Botnarash and goaled by Aleksandr Lysokon established a healthy lead but the hosts finished the first half in the ascendancy.

Experienced hooker Zoran Pesic scooted over in the 35th minute from acting half back and, on the back of further penalty awards, Pesic turned instigator, his offload sending in Adam Nedic to make it 16-12 at the break, the stand off also adding the extras.

Russia regained the initiative at the start of the second period, capitalising on a knock on by full back Ivan Susnjara from a raking kick along the ground, Grigory Esin taking advantage to cross.

Ten minutes later, following a superb 40/20, skipper Eduard Ososkov darted over in the left corner, Lysokon adding a penalty on the hour to make it 30-12.

Serbia again hit back with three tries in nine minutes to close to within two points and set up a dramatic finish. Susnjara made amends and Hemel prop Ilija Radan forced his way over, Russia looking in danger of being overrun when Botnarash was sin binned in the 69th minute for persistent offending.

Austen Novakovic went in two minutes later to get the crowd on their feet but further Serbian pressure failed to find the crucial score. Instead, Botnarash returned and busted the line to go 70 metres for the try that sealed victory.

Serbia vice captain, Soni Radovanovic noted, "I'm very disappointed because we worked really hard for this match. It was expected that we would lose against Italy and Lebanon, but we thought we had very good chance against Russia. We dropped the ball a couple of times when we had opportunities at the end and you can't do that if you expect to win. That was probably Serbia's best performance against Russia." 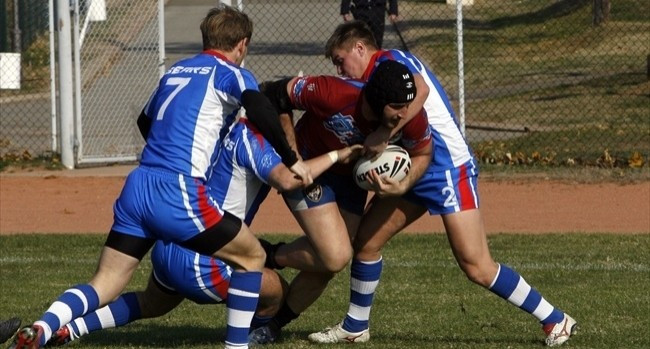