Ryan Hall had a try controversially not given for England in the last minute of their Four Nations defeat by Australia in Melbourne.

Hall got on the end of Liam Farrell's kick and seemed to touch down but the video referee ruled the ball had bounced up on to the winger's fingers.

Earlier, Australia led through Michael Jennings's try, but England went ahead through Kallum Watkins and Hall.Ben Hunt scored on his Australia debut and Greg Inglis went in for the win.

England now have to beat New Zealand next week by at least 10 points to be sure of reaching the final in Wellington, while Australia take on Samoa in their final group game after holding on for their first win of the competition.

With the players and fans watching the big screen at AAMI Park, the video referee Bernard Sutton took several minutes to reach his contentious verdict. Neither Hall nor his team-mates initially celebrated and with referee Gerard Sutton not giving a try, his brother Bernard would need "sufficient evidence", according to NRL rules  to overturn his decision, which he did not find.

Replays suggested that Hall's fingertips did touch the ball but the video referee would have to be certain there was downward pressure for the try to be awarded and 'no try' eventually flashed on the big screen, much to the delight of the home fans.

But with Hall touching the ball it meant Australia had the ball at the restart and were able to run down the clock to seal victory.

England, whose last win against their opponents came back in 1995, led 12-4 at the interval and were in control of the match but were left scoreless in the second period.

The sides were in changed kits to commemorate 100 years since the famous Rorke's Drift match of 1914, when Great Britain, against all the odds, battled to victory against Australia in the third Test of their tour down under.

And the two sides certainly served up another memorable encounter in Melbourne, although with returning skipper Sean O'Loughlin and his Wigan team-mate Liam Farrell put on report for a trip and a chicken-wing tackle respectively they could be missing against the Kiwis.

In England's victory over Samoa in their first game, the main criticism of Steve McNamara's team was the number of mistakes they made with ball in hand but four completed sets in the first five minutes showed their intent against the Kangaroos.

The visitors were the better side early on, applying pressure on the Australian line, but poor kicks from Matty Smith on the final tackle meant they were unable to break the deadlock.

Having held out, Daly Cherry-Evans played in Greg Bird, whose speed allowed him to burst clear of the England defence before feeding centre Jennings for the first try.

Kangaroos skipper Cameron Smith missed the simple conversion and McNamara's men were eventually rewarded for their perseverance with two tries in five minutes.

Winger Hall's superb 60-metre break laid the platform for their first score as Watkins touched down from Sam Tomkins's lay off before Hall got on to the scoresheet himself from Dan Sarginson's flicked pass.

Australia who lost to New Zealand in their first game could have reduced the deficit on the stroke of half-time, but Jennings flung the ball into touch in search of winger Josh Mansour.

England were full of confidence and full of energy, sensing Tim Sheens's side were rattled. They were throwing the ball around with ease, keeping it alive and nearly grabbed another try but Clark failed to collect Tom Burgess's pass.

That proved to be a crucial miss as Australia hit back after the restart, showing the sort of clinical finishing that had been absent in the opening 40 minutes.

Powerhouse full-back Inglis had an effort ruled out for obstruction but Hunt grabbed a try after pouncing on captain Cameron Smith's grubber kick and Inglis managed to get on the scoresheet from Cherry-Evans's burst.

But a dramatic last minute did not go England's way as Australia held on to stay in the competition and ensure McNamara's team now face a tough task if they are to reach the final. 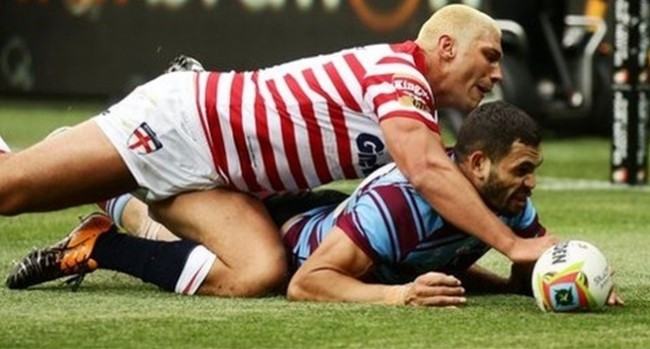