Almost 600 people made for an exhilarating atmosphere at Dyffryn Pennar Park on Saturday as the Mountain Ash Festival of Rugby League kicked off with an under 16 international between Wales and England. England came up on top 46-18 after dominating the first half but the inexperienced Wales side didn’t discredit themselves as they fought back with three tries after the interval.

Wales attacked well from the off and a knock on following a penalty denied them an opening score. But indiscipline let England into the game and after four penalties in five minutes, they had a chance to take the lead. From the last tackle of the set, Rob Fairclough kicked for Charlie Phythian but the Warrington centre was short.

England’s Will Dagger was sinbinned for a high tackle in the tenth minute but it was the visitors who opened the scoring when a man down. Fairclough fed Jake Woods for the Cumbrian to score in the corner. Fairclough’s conversion attempt hit the post. Still down 12 men, they increased their lead. Brad Clavering did well to push away his markers to score under the sticks. Fairclough converted to make the score 10-0.

Dagger made an impact as soon as he returned from the bin, setting up Charlie Phythian to go over for England’s third. Fairclough’s goal attempt was wide. Izaac Farrell twisted and turned for their fourth as he placed the ball under the sticks. Fairclough converted and the score went up to 20-0.

Wales’ first major attempt in the pace of 20 minutes was when Aled Cockwell made a 40 metre clean break from his own 20 metre line. However he was unsupported in his efforts and England were allowed back to defend the rest of the set that was completed with a Reece Brunt chip that went over the dead ball line. Wales remained scoreless and England went into the break 20-0 up.

Ten minutes into the second half and Widnes bound Sion Jones got Wales on the board as he stormed through the centre to ground under the sticks. Nathan Ainsworth converted to bring the score back to 6-20.

England addressed the balance less three minutes later as Conor Fitzsimmons did well to force his way over. Fairclough goaled. And they increased their lead further in the first set after kick-off, when Dagger scored in the corner. Wales weren’t finished yet and they hit back again through a Connor Kawulok try with Ainsworth converting. However England recovered and scored again from their next set when Danny Walker slid over and Fairclough converted to make the score 36-12 in favour of the visitors.

The visitors continued to stretch their lead. The resourceful Dagger who grabbed his second and England’s eighth of the day with less than ten minutes remaining on the clock. Clavering also completed his brace with Farrell adding the extras on this occasion. But Wales had the last say as Sion Jones went over for his second with Ainsworth keeping up his 100% record with the boot.

Wales coach Lee Cullen said: “I was disappointed with the players in the first half. We had a good opening ten minutes but we took our feet off the gas. I felt we were on the wrong end of some 50-50 decisions which didn’t help but I was pleased with our recovery after half-time. Putting into perspective, England have been training once a week since November last year while we’ve had six sessions and no warm up games. I think we did well given those odds and our players have gained a lot of experience today. Credit to England as well for taking their chances.”

England coach Stuart Barrow said: “I thought it was a really hard-fought game and we did well to build a lead. Credit to the Welsh boys who came back in the second half and put us into a bit of trouble in places. The players responded really well to being a man down and at this age group it’s great for them to get a task like that.”

Fourteen of the England players came from Super League clubs with remaining four playing their Rugby League at Regional Academies. Barrow gives credit to those players coming through the system who aren’t linked to a professional club.

“I’d also like to give credit to the RFL for introducing the Regional Academy system,” he adds. “Last year and this year, they’ve produced some really good players who have fitted in well alongside those who are in Super League Scholarship squads. It shows there’s talent out there in all areas.” 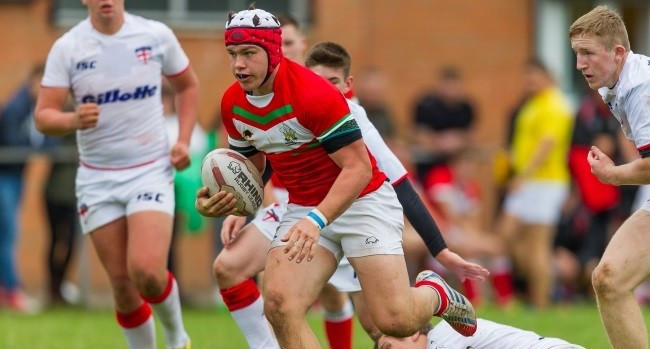