A hat trick by skipper Anthony Minichiello saw Italy book a 2013 Rugby League World Cup decider against Lebanon next week, after a 52-6 win in Belgrade against Serbia in their latest European Zone Qualifier.

The veteran Sydney Rooster crossed twice in the first eight minutes as the Azzurri made the early running but the Serbs, who were rocked by the pre-match withdrawal of their most experienced player Dalibor Vukanovic with a hamstring problem, were no pushovers.

Italy head coach Carlo Napolitano was pleased to keep the bandwagon rolling. “The game started very passionately, both sides got stuck into one another and the Serbs dragged us into an arm wrestle,” he commented.

“The passages where we stuck to our structure made it very difficult for Serbia to live with us. Riethmuller and Ciraldo were leaders in the middle and Mantellato was outstanding but the Serbs never gave up.” He added, “They have heaps of potential, with some big units. It will take them a couple of years to improve that much more but they played really well, controlling the ruck well and defending very bravely. We'll need to improve on our lapses of concentration ahead of next week and do some work on tightening our defence.”

After Minichiello’s initial blitz, on the back of some fine, expansive handling, Serbia regrouped and kept the visitors scoreless for the next ten minutes. Joel Riethmuller edged the Italians further in front and two tries in three minutes around the half hour mark. Centre Matt Parrata crossed and man of the match for the second successive week, winger Josh Mantellato, who also kicked eight goals, saw the Italians 28-0 ahead at the break.

Serbia had their moment of glory from the kick off to the second half, Italy spilling the ball, the hosts re-gathering and Zoran Pesic scooting over from acting half back, Adam NediÄ‡ goaling.

Three touchdowns in ten minutes soon after, from Dom Nasso, Minichiello with his third and Rhys Lennarduzzi restored the visitors’ supremacy and although Lennarduzzi crossed for his second to bring up the half century, the Serbians finished the stronger.

Vic Mauro was sin-binned in the 66th minute for alleged foul play and the home side dominated possession and territory for the remainder of the game without being able to turn that into what would have been deserved points.

It was a performance that left Serbian Technical Director Lee Crooks suitably impressed. “It was a very pleasing performance in the context of the vast difference in experience of the two sides,” he said. “The amount of effort and enthusiasm was outstanding and our control and structure was vastly improved, this week we made collisions stick and stifled the Italians.

“We don't have that sense of game awareness yet but we'll keep working on it this week. We had Italy on the back foot for long passages in the game, we did the basics much better and put them under sustained pressure but weren't always able to take advantage of it. We go into next week with a lot of confidence. Russia must have played magnificently to limit Lebanon to 32 points and it's a massive game for both sides.”

He proudly noted, “This match has put Serbian Rugby League on the map. It was a massive performance. Today epitomises the development that's going on here.”

Pictured: Dominc Nasso is taken to the ground by Austen Novakovic 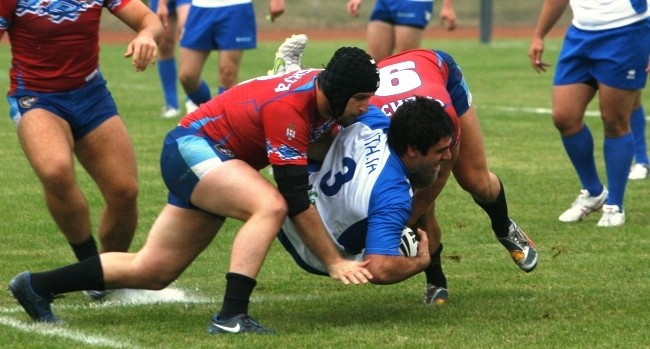