The Italian Rugby League team has taken out the Ionio Cup for the second year running.

Played for the first time on Marconi Football Stadium before a crowd of approximately 2000, who braved the cold & wet conditions to witness an Italian team which proved to powerful and skilful in both defence and attack against the Greeks.

The Italians were fielding two NRL experienced first graders in Paul Franze' and Jason Bulgarelli, but it was the lesser known Italian players that troubled the Greeks defence all night, punching holes and creating the overlap on many occasions.

The scoring account for the Italians was opened by the late inclusion into the team of Jason Commisso playing on debut in the number nine jumper. Commisso received the late call up from Italian Coach David Riolo midweek leading into the match after regular hooker and last years Ionio Cup man of the match winner Paul Dezolt withdrew due to family commitments.

Commisso was in devastating form, only just returning from a shoulder reconstruction this season.Italian halfback Andrew Dallalana was on song with not only his boot, but his precision passing and running of the ball.

Daniel Sorbello playing in the familiar number one position, came into the Italian training camp on Thursday, having flown down from Nth Queensland. Sorbello showed what a class player he really is, watching him bring the ball back from kick returns was exciting to watch for the very vocal crowd on hand.

Jason Commisso was able to gain good yards from dummy-half and set up a fantastic try for Daniel Sorbello who trailed him like a good fullback does to score a run away 40 metre try next to the posts.

Turning point of the game came when Italian back-rower Michael Russo was sent off from the field in the 20th minute mark of the fist half for a high tackle. This was a devastating blow to Russo, as he had trained so well leading into the game on making his International debut for Italy.

The Italians then had to rally in order to with stand the barrage from the Greek attack. Italian forwards lead by Jack Mazzoleni, Andrew Kaleopa, Anthony Phillips and Adam Capovilla all combined well and were relentless in there constant hit ups in the middle of the field.

The second half saw the well-drilled Italian team continue with its scoring spree. There was no stopping the Italians and even playing with only 12 players for the remaining 60 minutes of the match could not contain their commitment & enthusiasm in both defence and attack.

Italian Captain and lock forward Adam Capovilla turned in another powerhouse display in which we have all come accustomed to. Capovilla lead by example in steering his team around the fantastic Marconi Stadium field.

Italian centre Paul Franze' was electrifying when with football in hands, his running style and speed was too much for the Greek defence to handle. His left hand side running constantly had the greeks back-pedaling, with 30 and 40 metre gains on every occasion.

Italian based player Simone Franchini who had arrived from Italy in June this year and was training with the North Sydney Bears in Premier League took to the field in the No: 14 jumper and made the most of playing along side some very experienced rugby league players.

The experience that Franchini has gained from this match and training in Sydney with the Bears is priceless, taking all this knowledge when going back home to coach the other Italian based players. 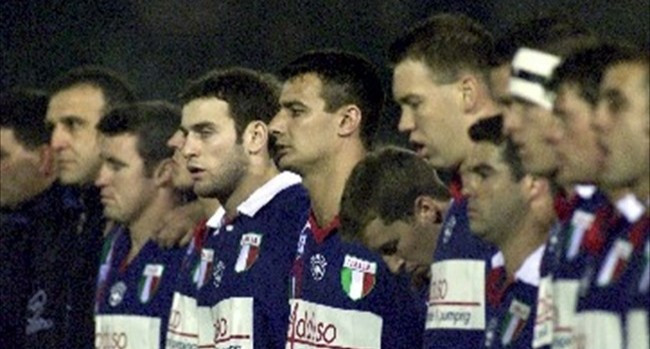