Scotland Students provided the hosts with a nail biting finale, eventually drawing with their Italian counterparts and winning the inaugaral series in Padova, Italy.

The gruelling fixture had the Scots poised on the edge of their seats when a penalty was awarded against them in the dying seconds.  The Italians failed to convert leaving the scoreline at 16-16.Scotland took the initial offensive with a try from Peter Shaw, having received a wonderfully timed pass from centre Rob Clarke, to score in the corner.

However, the Scottish defence appeared rather ragged allowing Italian Matteo Giocometti in for a try, forcing his way through 4 tacklers.  The Scots failed to take advantage of their possession, incompleting sets of 6.

The greatest opportunity disappeared from their grasp when Shaw dropped the ball after crossing the tryline.  Shaw was given the opportunity to redeem himself, taking a long pass out wide and bolting 20 yards around the outside of the Italian defence to score once more in the corner.  By half time the scoreline was standing at 8-12 in Italy's favour having kicked 2 successful conversions.

The equally passionate Italians were not prepared to concede more points hitting back immediately in the 2nd half.  Powerful driving by the forwards created problems around the ruck area forcing Scotland's defence to drift in and exposing an Italian overlap.  This made for an easy walkover try for Nick Calandra.

Scotland's turning point came when Robin Laing secured 2 crucial points from a penalty conversion, given for holding on after the tackle.  This was followed by another long awaited penalty against the Italians for continuous offside.  A quick tap penalty and sprint through the unprepared Italian defence meant Ian Gilmour could touch down between the posts, also making an easy conversion for Laing.

With a few minutes to spare the Italians knew they had to produce a converted try to win the series on points difference.  When the penalty came for offside right on Scotland's tryline, Scottish minds knew they had a fight on their hands.

The immense passion of the Scots provided that last ounce of energy to halt the Italian offensive. The roar as the final whistle blew illustrated Scotland's relief and ecstacy. Scotland had finally secured a series win and the face of the long-standing and loyal captain Ash Carroll when receiving the Cup provided the greatest illustration of the hard and determined work put in by all of the Scotland squad over the last couple of seasons.

An overjoyed Carroll will now hang up his playing boots having received the deserved series win against Tartarstan and Italy, but will continue to play a crucial coaching role with the Scotland Students, providing the expertise and expereince to assist Scotland in future series victories. 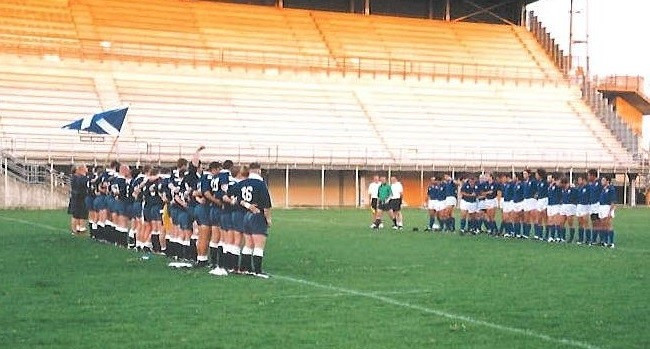