Serbia threw the 2014-15 European Championship B wide open at the half-way stage with their second-ever win over Italy, producing a massive shock at the Makis Stadium, Belgrade to move top of the table on points difference. The hosts were the more motivated, physical side, delighting their coach Marco Jankovic.

“It is quite rare when everything that we talked about in the changing room is executed on the field”, he said. “We started very strongly, we didn’t want to wait for Italy to get on top of us, we wanted to show them the Serbian spirit.

“We prepared really well, with a trial and over a six-week spell, because we were very unhappy after the Russia game. We improved our defence which was very tough; we got a lot fitter and because of those two areas more than any others we accounted for this convincing victory. This was without doubt one of the best ever Serbian performances but we expect next year to maintain that level, to be a lot more consistent in the games and over the season. “

Prop Stefan Nedeljkovic was outstanding in the opening stages, continually breaking the Azzurri line and setting the position for the opening try, linking with equally impressive centre Stevan Stevanovic. On the next play, veteran scrum half Dalibor Vukanovic sliced through on angled run to begin the rout. Austen Novakovic with a simple scoot from close range doubled the lead and, on the half hour, a great wide pass from stand off Vojislav Dedic saw Milos Calic angle his run perfectly on the inside to the posts, Vukanovic landing his third goal.

The Serbian bench became even more animated soon after when more direct running from Stevanovic saw him offload to the supporting Vukanovic for a try between the posts but Italy were given a lifeline when, on the back of a run of penalties, they turned that pressure in to points, their best Gioele Celerino powering onto a short ball from close range to make it 24-6 at the break.

The visitors needed a strong start to the second period but an error from the kick off was capitalised on by Vukanovic who’s long ball allowed winger Milos Djurkovic to beat his opposite number on the outside for a terrific score. He was in again soon after, Alessio Curione spilling a high ball under extreme kick-chase pressure and the ball being shifted left for Djurkovic to cross.

In the 65th minute, Italy knocked on from a scrum, Calic arcing to the right to send supporting full back Milos Zogovic stepping over and, soon after, Stevanovic gained his due reward with a try. The visitor’s day ended dispiritedly when Remi Fontana was sin binned in 73rd minute, Novakovic adding a last-second field goal to intensify their misery.

“It was a pretty disappointing day; you get them”, said Italy head coach Paul Broadbent.  “You need to turn up in the right frame of mind and we had a few new guys who probably didn’t deliver to the level that’s needed. We were found a bit wanting but we’ll come back stronger because of this. We can pat ourselves on the back when we’re winning but this is when we find the real measure of who we are.” 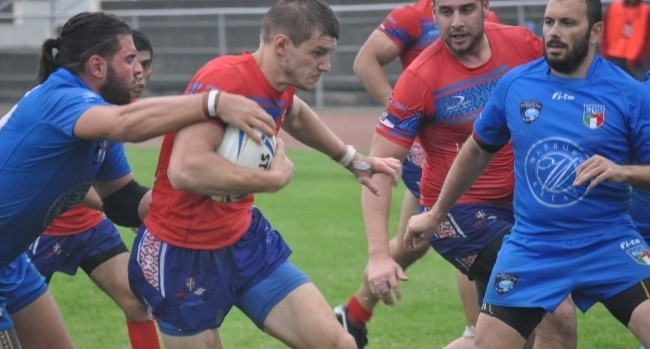