Italy went to the top of the table after winning the battle of the previously unbeaten nations but were pushed all the way by the Russians, both sides scoring three tries. What undid the Bears in the closing stages was their indiscipline, conceding three kickable penalties and nine in the second half in total culminating in the late sin binning of Anatoly Grigorev for dissent, and the dismissal of Ruslan Izmailov after the whistle for his protestations to referee Tom Mather.

Conditions were always going to dictate in picturesque Gemona, heavy rain throughout dominating, but the visitors were also undone twice in the first half by long range interceptions from Italy right winger Alessio Curione.

“We lost too much ball and were put under a lot of pressure but the boys hung on,” said Azzurri assistant coach Kelly Rolleston, head man Paul Broadbent having been prevented from travelling out at the last minute at Manchester airport because of an issue over a damaged passport. “A couple of interception tries kept us in the game when we were struggling but in the second half we played good field position in the difficult conditions.”

Rolleston added, “We knew they like to play it long and wide through their powerful centres and pushed up, Alessio reading it well on both occasions. It has been an excellent tournament so far and a great experience for the players – we had three from Serie A on debut today – and can now go to Serbia with confidence."

Russia were hit by the late injury withdrawal of their best player to date, Kirill Kosharin and quickly found themselves ten points down. Winger Chris de Meyer crossed in the corner on the end of a fine handling move in the fifth minute, Curione with his first intercept soon after, Matt Bradley goaling that to make it 10-0. The Bears responded well, prolific Dmitriy Bratko over out wide and Aleksandr Lysokon landing a superb touchline conversion; Izmailov powering over three minutes later, Lysokon again on target to put Russia ahead for the only time, 12-10. Four minutes before the break, Brescia’s Curione repeated his party piece, cantering 80 metres to the posts, Bradley goaling.

The third quarter was scoreless as possession was difficult to retain, Bradley extending the margin to eight points with penalties in the 63rd and 69th minute as the Russian’s discipline began to ebb. Bradley then missed a field goal attempt and, almost immediately after, Russia went to the other end and Petr Botnarash crashed over, Lysokon again adding the extras. Another Bradley penalty after Grigorev’s sin binning completed the scoring.

“It was a difficult match for us because of the rain,” said Russia skipper Roman Ovtchinnikov. “We didn’t take advantage of some of the attacking positions we worked. This is a strong team with a winning mentality so this is a hard outcome to take.” 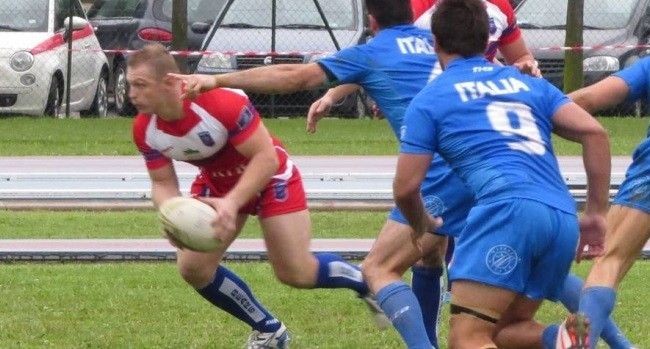