A hat-trick of tries from impressive debutante winger Miloš DjurkoviÄ‡, who was as good on defence as he was potent in attack, saw Serbia take the spoils in the opening game of the 2014-5 European Championship B.

Torrential rain in the region forced all other sports events to be cancelled but the Serbian RL worked wonders to get the match on and were rewarded with a fine win in front of over 750 fans, the second half being played in a downpour.

Two tries in the opening ten minutes from centre Stevan StevanoviÄ‡ and DjurkoviÄ‡, both created by Dalibor VukanoviÄ‡ with a fine pass and clever grubber, gave the hosts the perfect start.

Ukraine countered through prop Maksym Miroshnichenko after a long break by Danylo Pozhidaev down the left, goaled by Oleksandr Skorbach, but the Serbians played controlled rugby to take a 20-6 interval lead, Ivan TuliÄ‡ and DjurkoviÄ‡ crossing, VukanoviÄ‡ with two goals.

Pozhidaev cut the deficit five minutes into the second half as Ukraine elected for a long passing game despite the conditions but with man of the match, loose forward Stefan NedeljkoviÄ‡ setting the lead with his ferocious tackling, Serbia controlled the second half, Miloš Ä†aliÄ‡, full back Miloš ZogoviÄ‡ and DjurkoviÄ‡’s third touchdown giving them the initiative.

Mykhailo Troyan grabbed the visitor’s third try just after the hour but four minutes from time, Vukanovic’s step off his right foot and offload sent Nedeljkovic in for a deserving try, VukanoviÄ‡ landing his fourth goal.

Despite the win, Serbia coach Marko Jankovic called for more from his side. “I’m really satisfied with the result but I don’t rate it as one of our better performances,” he said. “We made a lot of mistakes, it was clear we were the better side with more skill and organisation, but we tended to lose our poise and start playing too much.”

“The Ukrainians were very consistent, they had a high completion rate and revolved around two or three very good players. We need to play better to make the games a little easier for our players. We had a lot of new players who came through our U20s side, which is a good sign.”

Ukrainian boss Gennady Vepryk commented, “The score was a fair reflection of the match, Serbia were the better team. Towards the middle of the first half, after we scored our first try, we thought we were going to get back into it but we just didn’t play well enough for the whole game.”

“We need to analyse the game and correct our mistakes before we play Russia next week. We’ll make some changes and hope we can bring back some injured players.” 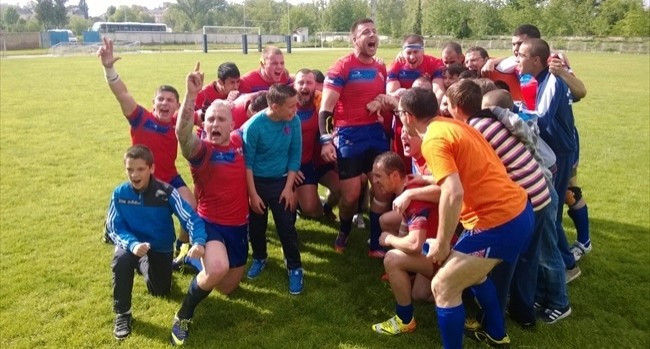