BARLA Great Britain Young Lions finished off their historic tour of Germany with another convincing victory over their hosts to clinch a 2-0 series win. After their opening win the Lions made changes ahead of this game and Germany called up a couple of younger, yet more experienced rugby players.

The Lions showed their experience - some having played for a decade to get where they are today - while as a development tool the German players will have learned from this tour.

After a day of torrential rain, the game was played in very wet and muddy conditions. The Germans didn’t manage to start as well as they did on Sunday in the first test, after a try by Connor Wilson (Flimby Vikings) after just three minutes, successfully converted by skipper Joe Prior (Wigan St Patricks).

A great break by Curtis Edwards-Hampson (Wigan St Patricks) led to the next Lions try with great support on his inside by club mate Prior who took the pass to score under the posts after outpacing the German fullback, Hampson added the extras to double the lead to 12-0 after eight minutes.

Germany scored the first and only points of the tour on ten minutes following a high tackle given by referee Warren Turley, with a 42 metres penalty from Felix Martel.

Tom Smith (Thatto Heath Crusaders) began a purple patch with three tries in five minutes to restore order with an unconverted great try bursting in from around 20 metres out. Prior was back in the action minutes later with another chip and chase to race away and score underneath the posts, and 20 minutes Howard Rowley (Ulverston) scored in the corner to show the Lions business. Touchline conversions by Dan Connell (West Bowling) and Joe Bold (Egremont Rangers) respectively made the score 28-2.

The Lions continued to attack and Harry Bromwich (York Acorn) got on the score sheet with a fantastic individual effort handing off three half-hearted attempts from the German defence to score 10-metres from the touchline.  Connor Casey (Oldham St Annes) added the extras.

A great running line by Rob Hamon (Blackbrook Royals) saw him through the German defence and cantered over and prop forward Smith kicked the goal on the half hour and on the stroke of half time Wilson completed his brace to make it 44-2 at the break.

The second half started with a second try from Hamon who scored underneath the posts after a charging run towards the line and Josh Hunter’s (West Hull) conversion brought up the half century.

The Young Lions began showing their class and speed on the outside as substitute Jack Lazenby (West Hull) went over in the corner after taking a spectacular pass by Prior on the Lions left edge on 55 minutes.

The young German defence was really starting to tire with the Lions making breaks at ease and on the hour Bromwich completed his brace right underneath the clubhouse in front of the British support, Lazenby kick made it 64-2.

The Lions completed the rout with a trio of tries in the final ten minutes after the ball moved through several pairs of hands it found Lazenby on the left edge to score, prop forward Luke Robinson (West Bowling). On 75 minutes Robinson was on the score sheet again with a great unconverted try crashing over from around 10 metres out through a very tired defence to make it 74-2.

Three minutes later Connell went down his wing for his double after a hearty final few minutes from the German defence.  Even the German players applauded Connell’s try which showed the spirit the game was being played in. In the final seconds of the game Rob Meadows (Ince Rose Bridge) scored the Lions final try after the ball was moved through numerous pairs of hands to create a great a big opening for him to crash over to make it 82-2.

Later In the post-match presentation, Wigan St Patricks' Liam Marshall was named the BARLA Young Lions player of the year for 2013. 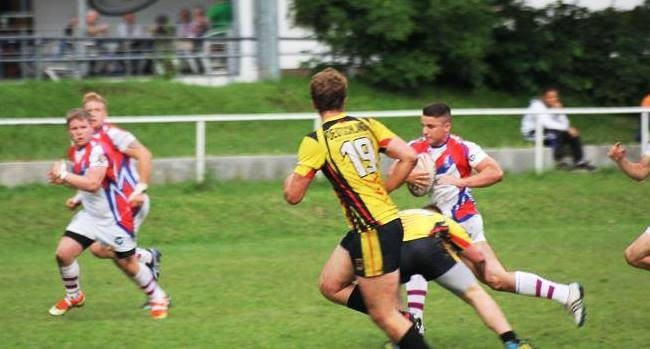