A hat trick from Dorcol’s outstanding loose forward Stefan NedeljkoviÄ‡ saw Serbia register a comfortable win over a gallant German outfit, to move into second place in the European Shield table. There was little between the sides in a tight first half, the hosts scoring 28 unanswered points in the second period, with two-try centre Stevan StevanoviÄ‡ also a handful.

“We prepared a lot for this game,” said NedeljkoviÄ‡. “It was very important for us, we knew a win meant that we would probably stay in this competition. We can now get ready for Russia.” He continued, “We started quite safe with short passes in midfield. In the second half we moved play wider and profited.”

NedeljkoviÄ‡ opened the scoring in the fifth minute with a try on the right after Germany had lost possession and then gave away a penalty, Miloš ZogoviÄ‡ with his first of seven goals. The score proved doubly costly for the visitors as they lost experienced centre Nick Keinhorst with a leg injury. They did level in the 12th minute, impressive Jeff Moate making the most of a quick tap penalty and Kristian Keinhorst adding the extras.

Serbia profited from back to back sets to go back in front, stand off Vojislav DediÄ‡ on hand to touchdown, ZogoviÄ‡ converting. Both sides defended their line well but on the half hour Serbia extended their lead, Vojislav DediÄ‡ at the heart, first with a superb wide pass and then a perfect kick on the last pouched by NedeljkoviÄ‡ for his second score, ZogoviÄ‡ on target again. Germany hit back six minutes before the break, Oxford’s Andy Hoggins with the pass for powerful winger Mawuli Amefia to crash over out wide for an unconverted score to make it 18-10.

NedeljkoviÄ‡ completed his try treble nine minutes into the second half, capitalising on a 30 metre run by young second rower Nemanja BoÅ¾iÄ‡. ZogoviÄ‡ goaled and kicked a penalty when the Germans were pulled up for leading with an elbow when in possession. Hoggins was just put into touch as the visitors threatened and expansive play saw the hosts go up the other end, StevanoviÄ‡ crossing.

The most spectacular score came with 11 minutes left, ZogoviÄ‡ fielding a kick in his in-goal and releasing Military Academy winger Radovan TajsiÄ‡ who beat three despairing defenders on a sensational 100 metre glory run. Serbian skipper Dalibor VukanoviÄ‡ set up their seventh try with a 40 metre run up the middle, Miloš Ä†aliÄ‡ on the end of it and, three minutes from time, StevanoviÄ‡ claimed his second score.

Germany’s Andy Hoggins commented, “There are a lot of plusses to take into the Italy game. Our attacking play was good, we were able to get round them but silly penalties and offloads cost us. The Serbians have a strong domestic competition, they were very physical and our defence was not up to scratch at times.” 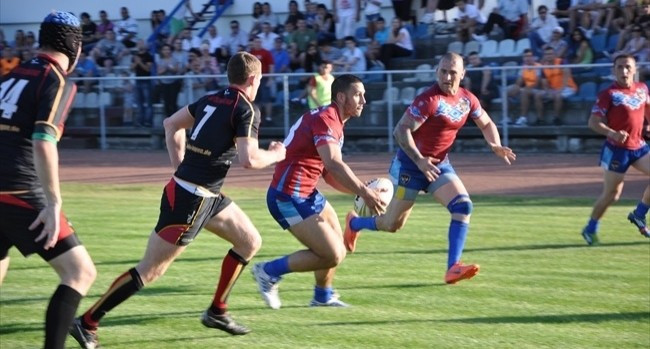