After 18 hours of rain in Baden, Germany and the Netherlands met for the first time in their history, with Germany beating Holland 28-22 in Holland's Independence Day weekend. A very young Germany side, featuring 14 debutants and five players from the under-18 side, trailed 10-8 at the break against a Dutch side that had been hit by a series of late withdrawals and injuries.

Baden Pirates centre Georg Frey  scored three tries for the home team but it was experienced prop Ben Behr-Heyder who got the hosts off the mark with a fourth minute try. Seven minutes later the Dutch hit back, before Germany’s 20th minute try and the final score of the half, to the Dutch, on the stroke of halftime.

The German team had Baden Pirates center Georg Frey to thank for his three tries and three try saving tackles. “It was a very exciting and competitive game – I really enjoyed it.”

Rugby League Deutschland vice president Uwe Jansen said: “We hope to make this game an annual tradition. We will visit the Netherlands next year, and defend the trophy the Netherlands team brought with them, called the Griffin Cup.“ The Griffin is a mythological creature, half eagle - the symbol of Germany - half Lion - the Dutch national animal.

Netherlands head coach Jason Bruygoms said “I am very proud of the team for the big effort they made in the last few weeks. Fatigue and having no more reserves took their toll but we are still all smiles. It was a great day.”

Germany coach Dan Stocks was on hand to look at some players ahead of the natioal team's visit to Belgrade on 18 May for the first match of the year in the 2012-13 European Shield. Germany are bottom of the table on points difference, tied with Serbia and Italy on two competition points, behind Russia on six. 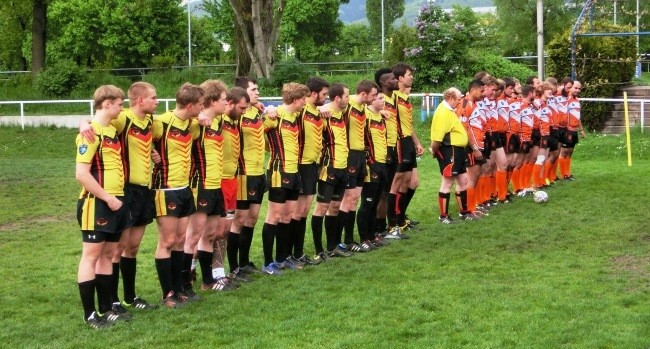