Isaac Schmidt led the Vikings to the most significant victory in their history with a shock win against the double defending European Bowl holders. His offloads constantly troubled the Czechs and his defence top class as he led the Norwegian line.

The visitors were left ruing several lost chances, especially down the right, slick handling getting them to the home line but knocks on or desperate last ditch defence keeping them out. Both defences were characteristically robust, especially early on, some tackles straying high but the game was played in a good spirit.

After the initial softening up period, a slick back line move saw Norwegian full back Matthew Davidson cut through but he just failed to ground the ball over the line and was denied. Soon after, though, the hosts were in through Sonny Mellor for an unconverted try but by the 15th minute the sides were level, fellow centre Pavel Zemanek doing likewise for the Czechs.

Davisson made up for his lost opportunity to edge the Norwegians ahead 8-4 but again their lead was short lived, Ladislav Cintler crossing and Jan Buben goaling to edge the visitors in front.

Seven minutes before the break, Norway were back ahead, winger Magnus Sundsfjord clear on the overlap and round near the posts for Erland Granly Meldalen to convert to make it 14-10 at half time.On 50 minutes Vita Caslavka levelled but Anders Linnestå’s scoot from close in proved to be the game turner with 13 minutes remaining, Granly Meldalen adding the extras and the Czech’s resorting to panic plays as they saw the game slipping away.

Schmidt gained due reward for his efforts when he strode over with three minutes remaining, Meldalen with his third goal to seal an historic win.

The Czech Republic now have to beat Ukraine by a 20 point margin at home in late September if they are to retain their crown. 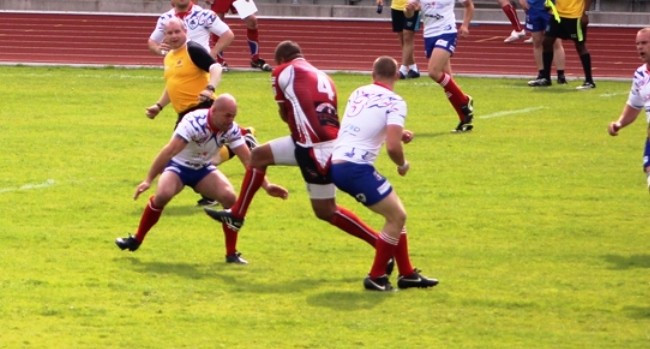