Ukraine lived up to its pre-tournament favourites tag with a comfortable win against Norway in the opening match of the 2013 European Bowl. Ukraine, led by four-try wing Oleksandr Korobov, outscored the visitors nine-tries-to-two in the first meeting between the two countries.

Coach Gennady Veprik’s charges scored four tries in the opening 15 minutes under a stiflingly hot sun to effectively blow the Norwegians out of the game. The pacey Kolobov scored two of those, in the 5th and 9th minute, as Ukraine efficiently swept through Norway’s flank defence. Substitute Kristoffer Håkonsen’s 24th minute score gave the visitors some hope but two further home tries made it 28-4 at the break. Had Kolobov’s fellow winger, Sergii Romanko, not had such an off day with the boot, kicking only three from nine attempts, the scoreline would have been worse for Norway.

Ukraine scored three more second half tries, while the Norwegians will take heart going into their second game, at home against the Czech Republic on Saturday, after scoring two more tries of their own.

“We have been waiting for this game with great impatience,” said UFRL president Artur Martyrosyan. “Everybody felt a great weight of responsibility for the result and we have worked as a squad for two weeks, checking the game plan and moves and testing the players. After the win over Norway we know we have to beat the Czechs in September if we are to be promoted to the European Shield in 2014.” 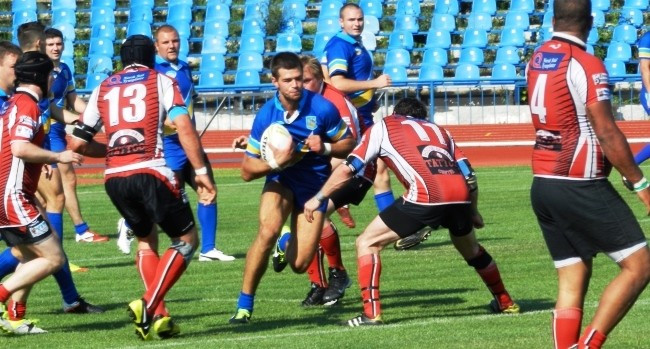