Jarrod Sammut brought his flair to Copenhagen’s Gentofte Stadium and unleashed on a fighting Denmark outfit as Malta completed the double in taking the 2012 Dove Men+Care International Series.

The 25-year-old has a host of Super League clubs chasing his services for next season and he showed why, as the talented little general laid on four tries and missed only two goals in a 38 point haul for the Maltese.

Sammut got the scoreboard ticking over with two converted tries inside the opening 10 minutes and with captain Chris Parker crossing shortly after, the Maltese were up 18-nil after as many minutes.

The Danes replied momentarily, after a dropped Danish pass and a swift foot kept the ball alive to see Cameron Woods score the Dane’s first points of the afternoon as the sun came out on an otherwise drizzly weekend in Danish capital.

But the Maltese were well drilled and after a lackluster preparation, piled on the points in the second half, debutants Carl Grima and Jonathan Magrin both crossing.

Viiga Lima read the game well all day, stepping his man in similar fashion to the way he did in Malta, to pull one back for the home side.

The Danish handed debuts to Morten Damm and Robert King, but the Maltese were unrepentant, Sliema Stompers winger Ed Willis crossed from dummy half after an attacking raid down the left flank.

Barlogio and returning centre Paul Bartlett made it onto the score sheet too for the Maltese and Shaun Gilmour returned two tries in yet another strong display for the Maltese.

Among the talent, were seven domestic based players for the Maltese, two from Gozo RC and a trio of Stompers, along with Malta Origin’s Joe Paolella and Sam Keep pressing their claims for further call-ups next season.

Cardiff based Shaun Bartlett put the icing on the cake in the final minutes and Sammut added the extras for the 11th occasion to record Malta’s largest victory over European opposition.

Earlier, children from the local Skovbro Efterskole school played a game of tag rugby before joining an enthusiastic home crowd in the stands.

Malta coach Anthony Micallef could barely fault his team after the match: “They were in fine form. The domestic players, it is evident to all, are stepping up, and eventually challenging the overseas based members of the squad for more places in the team” said Micallef “We unearthed a couple of new talents in Maltese rugby circles today. Jonny Magrin was solid, and only 17. In fact, we had a very youthful squad out there, that’s the future of the game for us together with the experienced senior playing group” 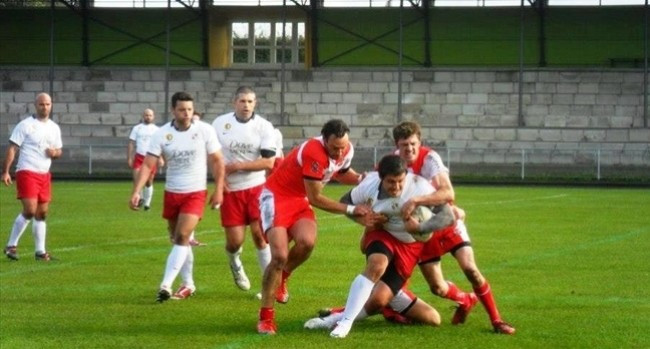