A 73rd minute drop goal from player/coach Eduard Osokov saw Russia extend their lead at the top of the table to four points at the half way stage of the European Shield, in Naro-Fominsk.

In a clash dominated by excellent defence, the Serbians were left distraught after their second one-point loss in the competition, their previous heartbreaker coming against Germany.

Russian try scorer Sergey Gaponov was relieved his side had hung on: “The game against Italy a fortnight ago was really tough and some of our players were still suffering from knocks,” he said.  “We didn’t expect that the Serbs would fight like that until the last seconds of the game and we brought pressure onto ourselves with too many dropped balls at the end. But we dug in and managed to get the victory.”

He continued, “We’re in a good position now, with three wins from three, but next year we know we’ll have to play well to get the same results. Two wins will be good enough to win the Shield but we have to try to get through undefeated. Serbia and Italy are going to be really tough as they’ll be at home but all we can do is try to prepare as well as possible.”

The 2013 schedule of reverse fixtures will be announced in due course.

The tone of the game was set early, Serbia conceding two penalties and losing possession twice near their own line but defending superbly to keep the hosts out.

On their first break out the visitors went in front, Zoran Pesic – continuing his appearance record with a 27th consecutive cap – setting the position for Stevan Stevanovic  to muscle over from acting half back, Dalibor Vukanovic goaling. Russia responded on 20 minutes, strike centre Petr Botnarash scampering clear, Aleksander Lysokon adding the extras and, just after the half hour, they were ahead Gaponov weaving over from 10 metres out and Lysokon’s goal making it 12-6 at the break.

Serbia opened the second half in terrific style with a wonderful score, a fine passing move seeing Ivan Susnjara and Vukanovic combining and Sefan Nedeljkovic catching and passing in one movement to send Stevanovic over in corner for his second touchdown. The visitors undid their good work by trying to keep the ball alive near their own line under pressure, Russia re-gathering and Maksim Suchkov threatening out wide on the left before feeding Igor Chuprin who dived over just inside the corner flag to make it 16-10.

In the 57th minute, Serbia levelled, Vojislav Dedic splitting the cover on a kick return, Hemel Stags’ Ilija Radan making significant metres on the back of it and Nemanja Bozovic going over, Vukanovic converting. A fumbled kick by the Serbians gave Russia cheap possession soon after and, from the resulting scrum, a move to the right saw Dmitriy Bratko in for a try on debut.

A mistake by home back rower Vadim Fedchuck in midfield returned the compliment in the 69th minute, Milos Calic arcing to the right and sending out a nice pass for Mirko Bozic to go over out wide to level at 20-all. Vukanovic missed the conversion attempt but the referee asked for it to be retaken as he was not ready, the ball again dropping agonizingly wide.

Ososkov made the most of more spilt ball as Serbia tried to clear their line with the ultimately decisive one-pointer but there was still drama at the finish.

In the 77th minute Serbia received a penalty for a ball steal but the attempt went wide and, in the final play, Vukanovic chip kicked to right, Danilo Delic batted the ball back into field of play but it was fumbled on the goal-line in the scramble for possession.

Serbia coach Marko Jankovic was philosophical in defeat. “The biggest winner today was European rugby league,” he commented “I’m so proud of the boys because this was a very special game of rugby league. It was a really dynamic and intense game and the result reflected that perfectly.”

He added, “This was the toughest game we’ve had against Russia and we now have the opportunity for revenge in Serbia next year, we have narrowed the gap.”

Pictured: Petr Botnarash slides in for the first Russian try. 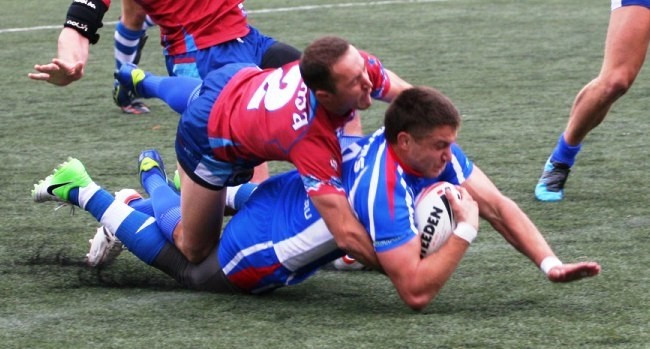