Serbia came from eight points down to claim their opening victory in the 2012/3 Rugby League European Shield, winning 24-18 in Belgrade as Italy made their bow in the competition. Two tries in four minutes in the closing stages put the hosts, who had agonisingly lost by a point in Germany in game one, ahead for the first time but it needed a despairing late tackle into touch that denied Romain Pavori to confirm the spoils.

“We needed to be mentally strong, patient and follow our game plan in the second half,” highly satisfied Serbian coach Marko Jankovic commented. "We moved Vojislav Dedic to fullback in the second half, and Milan Susnjara to hooker, which made a difference, and when Zoran Pesic came back on in the final 15 minutes to go he put us on the front foot."

In stifling conditions that reached over 100 degrees pitch side, both sides produced highly commendable performances, although fatigue in the oppressive heat understandably led to dropped ball. Serbia had the first clear cut chance in the fourth minute, game star Lazar Zivkovic denied a try after a knock on by Milos Calic following good work by veteran hooker Zoran Pesic.

Second rower Drake Muyodi led the Italian response with the first of a series of line breaks, Mirko Bozovic’s tackle forcing the ball from Ivan Barani in a promising position. Another Muyodi 40-metre charge set the position for the opening try in the 18th minute, stand off Rhys Lenarduzzi making the most of a penalty and forcing his way over, Gert Peens adding the extras.

The Serbians hit back immediately, Pesic was held up but a quick play the ball saw Stefan Nedljkovic put Niksa Unkovic over for an unconverted try. Remi Fontana went close for the visitors but he was then provider, Barani crashing over from his pass, Fontana goaling to make it 12-4. Ivan Susnjara knocked on with the line at his mercy after more determined running by Zivkovic and, in response, Davide Rancati came close to scoring but stepped into touch under pressure from Ilija Radan. As the first half came to a close, Serbia forced three repeat sets but Nedeljkovic knocked on under pressure from Pavoni.

They did narrow the gap three minutes into the second half when Nedeljkovic crossed in the corner from a clever reverse pass by Pesic, skipper Dalibor Vukanovic landing a terrific touchline conversion. Italy regained a short kick off and Stefano Cardella battled over for a try, goaled by Fantona to restore their two score cushion but fine interplay saw Nebojsa Zivanovic just touch down in the corner, set up by a fine off load from Stevan Stevanovic and a great pass from Vukanovic. A Vukanovic grubber kick against the post just evaded the on-rushing Ivan Susnjara and repeat sets by the Serbs just came to nothing thanks to resilient Italian defence.

Finally, the home pressure told and centre Danilo Delic brought the crowd to life with a powerful run which just saw him draw Serbia level, Vukanovic edging his side in front with the conversion. After a kick from Fontana went out on the full and good ground was gained by Radan and Pesic, a quick passing move saw Calic put Bozovic over in the corner, Vukanovic landing an excellent goal.

Stevanovic was denied a try because of a double movement and Italy refusing to give in Octavian Ilinica making a terrific clearing run and Muyodi held up at the line, a knock on from Lenarduzzi ending the attack. Red Star Belgrade tyro Dedic nearly went the length of the pitch to score but was stopped by full back Fabrizio Ciaurro and Vukanovic missed a drop goal attempt, Italy having one last effort through Pavoni but it came to nought.

“Our effort was enormous, there was a fair bit of naivety because some of the players were inexperienced, but they did superbly well,” said Italian coach Paul Broadbent. “They need more game time to handle pressure and keep their composure with the ball. We knew that the team who did the least defending in these conditions had a good chance to win and in the second half we didn’t look after the ball as well Serbia did.” 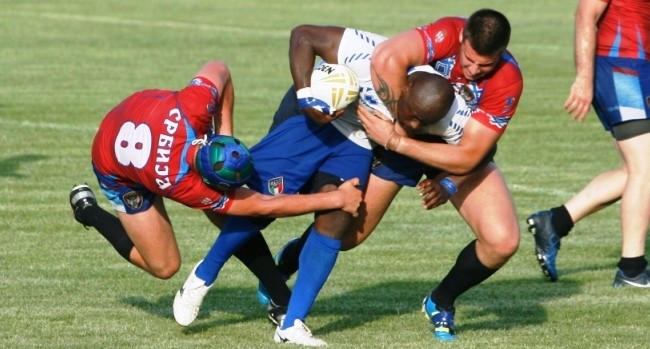