Germany secured second place in the 2010 European Shield West with an 18-try romp over a lacklustre Czech Republic in Hochspeyer, outside Kaiserslautern in the west of Germany. On a beautiful Saturday afternoon, the visitors had no answer to a German outfit that was superior in every department, dynamic hooker Dan Stocks leading the way with four touchdowns.

Kristian Keinhorst – one of three influential brothers in the home ranks who all posted points – grabbed a personal haul of 30 from two tries and 11 goals as the Germans scored at better than a point-a-minute, allowing the 350-strong home crowd to get into party mood from the off; Stocks, second rower Bene Rehm and winger Christoph Huber all crossing inside eleven minutes.

The one-sided match was the swansong for two stalwarts of the European game, with Germany’s Simon Cooper – who had a fairytale finish with a try, a goal and the best offload of the game to set up Nico Koch for his second try of a hat trick - and the Czech Republic’s Andrew Mulhall bringing the curtain down on their respective international careers.

Cooper will have the fonder memories of his send off, while Mulhall, whose role as new Czech national team coach could not have got off to a worse start, can take solace in the fact that things will rarely be any more difficult.

The Czech’s, who turned up on the morning of the game after travelling all night by bus, were not helped by early injury to prop forward Lada Novak, while loose forward Otakar Kasal took no further part after suffering a nasty eye injury towards the end of the first half, and scrum half Jan Buben was then forced to patrol the wing after receiving an incapacitating shoulder injury. But even had the Czechs benefitted from a fit squad for the entire match, they would have struggled against a fitter, technically more proficient and hungrier Germany.

On reaching his tenth and final cap – the first German to achieve double figures – Cooper said, “For me the last six years have been a great honour, to start rugby league in Germany from nothing; from Rotterdam in 2005 when we only had six players and borrowed a Welshman to make up the numbers to now, where we have League being played in four states in Germany, is very rewarding and worth all the hard work. It was a great team success today; I’m very proud of the guys and to be part of such a squad and a great victory.”

The RL Deutschland board used the occasion to put together the building blocks for a new strategy which they are confident will result in substantial gains for the game domestically, a thought echoed by a bullish Cooper. “The future for RL Deutschland is to keep growing at home as well as internationally. It’s been a great honour and it’s now time for the young German guys to push through; they showed today they deserve to be in the national time.” 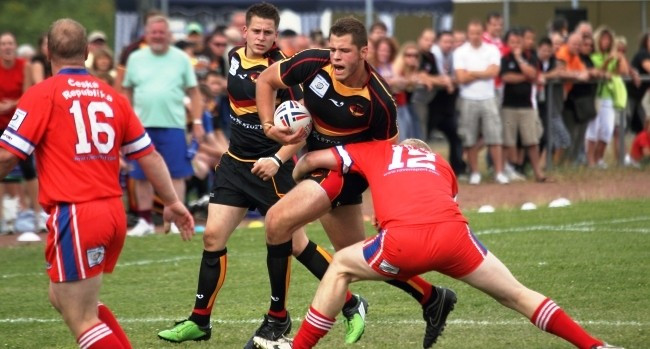