EUROPEAN CUP GAME 5
Iestyn Harris’ young Welsh side heroically won the Alitalia European Cup – and with it a passage into the 2011 Four Nations Tournament – with a thrilling 12-11 sucess in Albi, that was a reward for enterprise and wonderfully committed defence. Despite lacking talisman Lee Briers through injury, Gareth Thomas taking on the captain’s armband, the Welsh underdogs shocked the 10,413 home crowd in a superb contest that again underlined the rising quality of international rugby league.

The result was in doubt right up until the final seconds when Sebastien Martins knocked on as France threatened, Lloyd White’s 76th minute penalty – given after a late challenge by Jamal Fakir on the last tackle, proving to be the difference. White was one of a number of heroes in red, Thomas had a huge first half, mohawked Mark Lennon was a calming presence throughout and up front Jacob Emmitt and Ross Divorty from the bench held the defensive line together. France started strongly but Wales were tough in defence with Jordan James and Christiaan Roets especially standing tall.

In the first real attack, Cyril Stacul was stopped in his tracks by Roets while young custodian Elliot Kear desperately cleared up from a Nicolas Munoz grubber kick that forced a goal-line drop-out. Remi Casty almost went over but was halted just short after receiving Kane Bentley’s off-load as the hosts looked to take control. Sloppy passing from Olivier Elima also prevented the home side from registering an opening score, a chance wasted after Tony Gigot’s excellent 40-20.

Wales’ first opportunity came on 14 minutes when Lennon attempted to get onto the end of a high bomb but home skipper Elima was first to the ball. France eventually broke through on 17 minutes when Quentin Nauroy got on the end of a Teddy Sadaoui pass after full-back Stacul had sliced through, Munoz missing the conversion attempt.

Nauroy could have scored a second but Welsh full-back Kear brilliantly snatched the ball away from him as he looked to get on the end of a grubber kick. Wales dominated the final 20 minutes of the first half territorially but, without Briers, lacked a decisive cutting edge. Warrington starlet Rhys Williams thought he had a try on the board when he dived onto a loose ball but video referee Ben Thaler ruled that Kear knocked on when diving for the ball in the lead up.

An Aled James pass was palmed down leading to a Welsh scrum on France’s 10 metre line but, again, the visitors failed to take advantage of possession and the chance was lost, while a hopeful Kear pass five minutes before the interval, aiming for Lennon, sailed to into touch.

Both sides tightened up in the second half, especially when it came to handling errors with fewer scrums given away, even as the intensity of the contest increased. Wales gained due reward on 46 minutes when the prolific Williams got onto the end of Danny Jones’ pass after a superb grubber and re-gather from White. It was his tenth Welsh try putting him in second place in the all-time list, just two behind his coach Harris, White converting superbly from the touchline to put the visitors into the lead.

France looked to hit back but Gigot’s grubber to the in-goal went too far for Jean Philippe Baile to reach. Just before the hour mark, Wales won a penalty 30 metres out when Baile led with the elbow when in possession on Jones but eschewed the short at goal and were rewarded from the tap. Quick passing to the right through Jones, White and Kear paid off when Thomas burst over to make it 10-4.

In response, Casty was short of the line in a strong attack while Lennon and Kear cleared up the resulting kick for Baile. France levelled on the back of a measured Gigot cross kick, palmed back by Nauroy for Teddy Sadaoui to gather and go over by the flag, Munoz landing a terrific goal from out wide. White looked to have scored for Wales with eight minutes to go but his drop-goal was ruled out for obstruction by Jordan James on Jason Baitieri. From the resulting penalty, France stormed upfield and Gigot potted what looked to be the winning one-pointer.

But with four minutes to go, Wales were awarded a penalty 40 metres out following Fakir’s illegal challenge and White coolly kicked the winning goal. There was still drama when, in the closing minute, France were awarded a differential penalty at a scrum on half way but the tigerish Welsh defence held firm. 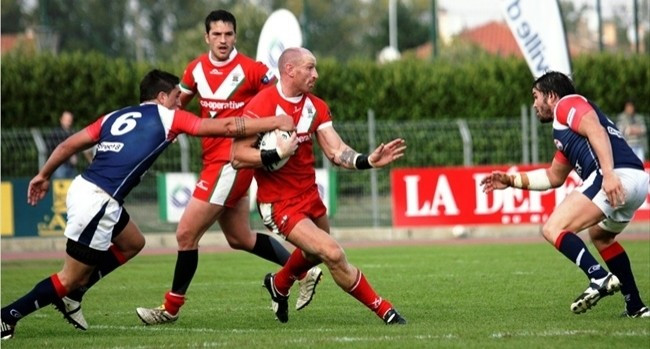