EUROPEAN CUP GAME 4
Wales and France will go into a winner takes all clash in Albi next Saturday for the Alitalia European Cup and a place in the 2011 Four Nations tournament to take on England, Australia and New Zealand.This is after Wales sneaked a 31-30 win over Ireland in a tense match at The Gnoll in Neath on Sunday.Both sides go into next week’s game with two wins under their belts turning the concluding group match into an unofficial European Cup “Final”.

Wales didn’t have it all their own way at The Gnoll and it took a late field goal from Lee Briers to give the home side a seven point cushion going into the final five minutes.And it was a score that was needed as Ireland fought back with a final try leading to a tense final 120 seconds. An early Gareth Thomas break almost led to the opening Welsh try in the first minute of the game but he was stopped short by Ryan Boyle.

Wales did take the lead on four minutes when Mark Lennon did well to catch a high bomb and score in the corner. Ireland had the chance for a breakaway try in return when Greg McNally laid the ball off to Simon Finnigan but the pass was fumbled and the chance went begging.

Lee Briers could have scored Wales’ second try but he was forced into touch when crossing the line. But Ireland levelled on 17 minutes when Tim Bergin finished off a fine passing move by grounding in the corner. McNally’s outstanding goal gave them the lead.

And they scored again straight from kick-off. Finnigan started the move with a fine run, Matthew Fox was in support and McNally scored under the sticks before converting.

There was a chance for a further try for Ireland after being gifted possession on their own 20-metre line but Luke Ambler’s grounding was over the dead-ball line. Wales recovered from their good fortune and worked their way upfield. And following a excellent team effort, Lennon scored in the corner for his and Wales’ second. Ben Flower was centimetres short of getting Wales’ third but the home side did level when Ian Webster was put through brilliantly by Ross Divorty to go under the sticks. Lloyd White’s kick gave Wales a slender lead at half-time.

Ireland regained the advantage six minutes after the interval when Finnigan set up Ryan Boyle to go over from close range. McNally converted. But Wales came back on 58 minutes when Rhys Williams scored in the corner after a period of strong Welsh pressure. White, who had now started to control the game with a number of outstanding moves, converted again.

Ireland regained the lead five minutes later. Jamie O’Callaghan was stopped in his tracks by Christiaan Roets but from the next play, Luke Ambler grounded and McNally converted.

But the pendulum swung Wales’ way again on 68 minutes when Roets was set up by White to score with the assister converting again. And, after Gareth Thomas was short of the line, Rhys Williams was set up by Danny Jones to score what was eventually a vital try.

White missed the kick to leave Wales just six points. Briers looked to have made things safe with a drop goal but Ireland weren’t finished yet as McNally scored and converted his own try on 77 minutes. The game was finally sealed with 70 seconds remaining on the clock when Ireland’s Tim Bergin fumbled a pass on the wing giving Wales possession that they didn’t lose. And they almost went over for a further try to seal things but the hard-working Jordan James was held up over the line.

Wales coach Iestyn Harris said: “We’ve used our get out of jail free card if I’m honest. We were a little bit scratchy at times. Ireland are a good side and didn’t do themselves justice in France last week. They came with a will to win and we did it tough at times. But if we keep improving and working on things that didn’t go too well, eventually we’ll get there and hopefully that’ll be next week. The whole competition is a build-up to the last game and you just hope that you’re two from two going into it. We’ve managed to do that and the players found a way to win today. A couple of things went against us but we found a way. If it’s tough again next week then hopefully the experience we had today will take us into it.”

Ireland coach Andy Kelly said: “I’m massively disappointed. I thought we worked really hard, like we did in the French game when we got a thumping. But this week we gave ourselves a shot at the game and when we pushed it out to 12-4, we started to look a little bit more comfortable. Then the half changed and we were behind at the interval. There wasn’t a lot between us.” 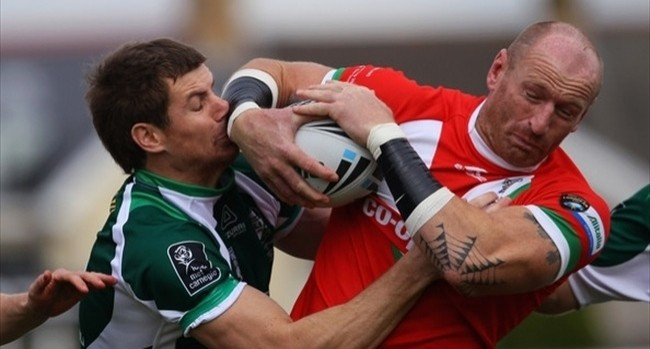