NORDIC CUP MATCH GAME 2
The Gladsaxe Stadium, the new home of Danish rugby league, was brought to life with the enthusiastic and noisy support of 486 Danes, many seeing rugby league for the first time. Norway, who fielded a number of younger players alongside those who’d contested the European Shield, started very strongly but a strong Danish defence, pinned in their own half, kept the well organised Norwegians from crossing the line.

The beginning of the first half saw both teams test each other’s forward play and Norway broke through first only to see the Danes respond soon after. As the half proceeded, the Danish back line started to find holes in the Norwegian defensive line and this was complemented by well-placed, in-field kicks by the Danish Stand-off, Rune Nordvang. Just before the end of the first half, the Danes score two tries in quick succession through expansive passing and support play.

The second half continued as the first half finished, with darting runs leading to two quick Denmark XIII tries within five minutes of the restart. The Norwegians fought back and recovered to cross the line once more in the middle of the half. The speed and agility of the Danish backs eventually told and they crossed the line twice more to settle the game.

The Norway-Sweden match was postponed. 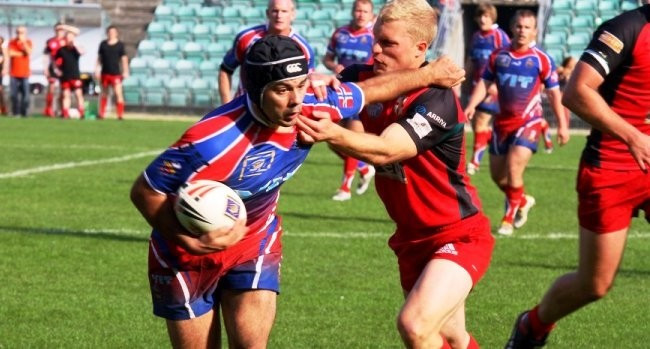