EUROPEAN CUP GAME 2
Wales put themselves in serious contention for a place in the Four Nations tournament in 2011 with this stunning victory in Glasgow. They inflicted a record home defeat on Scotland with 24 points in the last 12 minutes, Warrington winger Rhys Williams and Crusaders' full-back Elliott Kear both scoring hat-tricks, while Gareth Thomas got his second try in international rugby league.

But it was Warrington star Lee Briers who pulled the strings for Wales, kicking Scotland's full-backs and wingers into submission and earning the man of the match award for conducting their offensive display, even without his eight conversions.

No-one could have expected this scoreline. With the previous six meetings ending in three wins apiece, these are extremely well-matched nations and both teams were at virtually full strength. Neither side could afford to lose here, with daunting trips to France yet to come and that was reflected in the line-ups. It could be said to be the strongest Wales team fielded for almost a decade, and Scotland have rarely looked as good on paper with the exception of the 2008 World Cup. The Bravehearts included 11 players with Super League experience, Wales 14, including Gareth Thomas who was playing just his 15th game of rugby league.

As expected, Danny Brough and Lee Briers conducted the early stages but in a blustery wind, kicking was difficult to direct. Wales earned a breakthrough when scrum-half Danny Jones broke the line and fed Rhys Williams a try on the left. Briers converted for a 6-0 lead. But Williams dropped the kick-off and from the next set Hull KR star Ben Fisher scored by the posts, Brough converting. Elliott Kear broke the line on halfway to race clear and put Wales ahead again on 14 minutes.

But Wales had found Scotland's Achilles heel: their back three failed time and again to deal with Briers' high kicks. Rob Lunt dropped one and seconds later Kear was over for his second try, then Mark Lennon squeezed inside the corner flag to touch down another Briers kick. Soon after Lunt was failing to deal with another Briers bomb and Lloyd White bulldozed his way over, Briers' conversion making it 26-6, a points a minute for the reigning European champions.

The game was almost over: Scotland needed something special and they got it, replacement hooker Andrew Henderson scampering across the line from close range twice in three minutes, Brough converting both to reduce the Wales lead to just 18-26 at the break.

But that was as close as Scotland got. Williams got his second three minutes into the second half and Thomas was gifted his second in five days from another mis-fielded Briers' crossfield kick on 50 minutes. Fisher pulled a try back and the Dragons were on the backfoot with still 25 minutes for Scotland to get claw back another 14 points.

Instead the Bravehearts forced the issue, made errors and Wales punished them with four tries in the last 12 minutes from Kear and Williams - both completing their hat-tricks - then St Helens starlet Jacob Emmitt and, in the final few seconds, Jordan James. Briers' 16 points haul disguised a masterful display with his kicking from hand and game management that will be needed again if Wales are to topple pre-tourament favourites France in a fortnight. 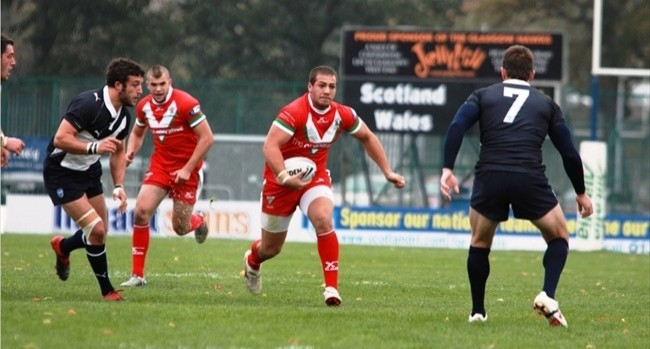