EUROPEAN BOWL
The Czech Republic won the 2011 Rugby League European Federation European Bowl with a 38-16 triumph away in Keskemet against a hugely impressive Hungary XIII, who made their international debut. There was nothing between the sides in the first half, the Czech Republic’s ability to play out their sets and tenacity in defence when defending their own line the ultimate difference.

Czech scrum half Victor Leeuw led the scoring honours with a hat trick but it was the pace and confidence of two-try visiting full back Jan Buben that took the eye. Czech player/coach Andrew Mulhall opened the scoring in the sixth minute with a try from dummy half, close in, Buben converting.

Leeuw claimed his first soon after, on the end of a fine back line move and Buben’s thrilling 80 metre solo run built a seemingly comfortable 14-0 lead. But the Hungarians found their feet and staged an excellent recovery in the lead up to half time. An expansive move across the three quarters on the half hour uncovered Scott Torrance and he went over in the corner and added a great touchline conversion. Just before the break skipper Zsolt Haboczki powered his way over and again Torrance goaled to make it 14-12.

Czech captain Petr Sedina went in from acting half back six minutes into the second half, Buben goaling and a clever grubber on the last tackle by David Dolak found his half back partner Leeuw who scored as the visitors regained control. Buben’s second was another long range kick return, which he added the extras to and ten minutes from time a 50 metre jinking run from Leeuw completed his treble.

Twice during the second period the Czech’s held out consecutive sets on their own line after conceding penalties as the Hungarians gained in confidence. That was rewarded five minutes from the end when Phil Angel crossed for the hosts.

On receiving the trophy, Czech captain Sedina said, “It was a great team effort, the guys exceeded my expectations.”

Hungary player/coach Adam Nunn was hugely satisfied with the display of his new charges. “The match was a great inauguration for the Hungarian players and I know that my boys are already looking forward to a return match with the Czechs.” 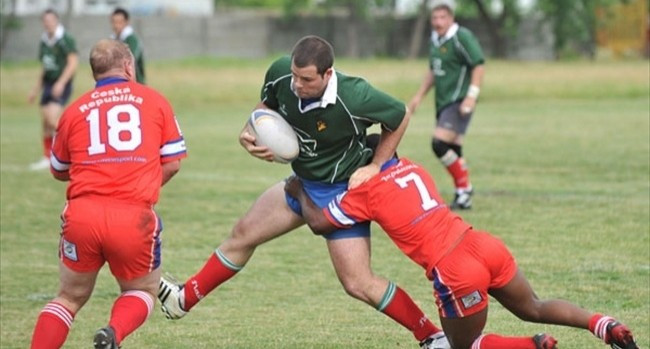